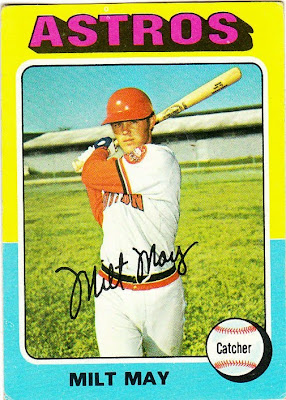 Card fact: The second of five players with the last name of "May" in this set.

What I thought about this card then: For decades I only knew this card in mini size. While looking to complete the regular set, the May card in regular form seemed monstrous. I almost didn't want to buy it because it was so big compared to my cute little mini card. But I got over it.

What I think about this card now: It's not often that you see a player wearing a helmet without an emblem. There are a couple of examples of that in the 1979 set with Reds -- including George Foster. I'm sure there are a number of others, but it's not that common.

Also, as with most of the Astros cards, May looks like he's taking swings on the back 40. What's that building in the background? Are those horse stables?

Other stuff: Milt May was a fairly good hitting catching who played for the Pirates, Astros, Tigers, White Sox and Giants. His best-hitting season was 1974 in his first year with the Astros (he was traded for Jerry Reuss) when he had 117 hits and hit .289. May was traded to the Tigers two years later for a handful of players who didn't do much for Houston. He bounced around for a couple of years before settling in with the Giants. He likely would have had his best year ever in 1981 before the season was interrupted by a strike.

May's moment in history came in 1975 when he drove in Bob Watson for the reported millionth run ever scored in major league history, landing a whole bunch of Tootsie Rolls for Watson. But as mentioned before, it was later discovered that Watson didn't score the millionth run, and somebody got gyped out of Tootsie Rolls.

May later coached for several teams, including the 1997 World Series champion Marlins. 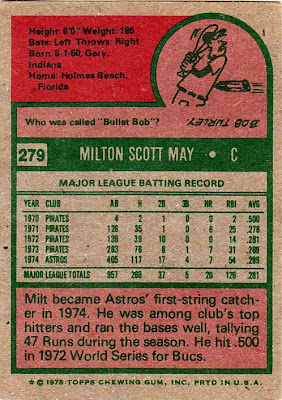 Back facts: Thanks to this cartoon, I knew about Bob Turley long before I knew he was a Yankee and that I wasn't suppose to like him. 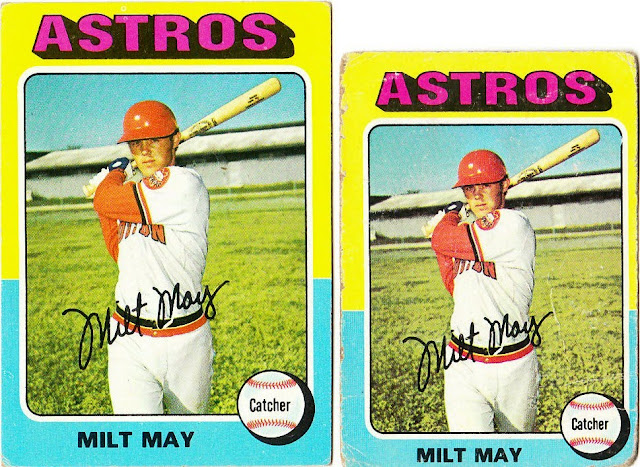 You think.."Wow, .500 in the World Series" and then you see he was 1-2. Nice stat Topps. That looks like a giant chicken coop in the background.

Yeah you're right it is much cute with the mini, cute because of the size. But monstrous in information. Pretty sweet.

It turns out Milt May was 1-for-2 with an RBI in BOTH the 1971 World Series against the Orioles and the 1972 NLCS against the Reds.

Wow! That building in the background is the Spring Training minor league clubhouse for the Astros. Pretty ugly eh? They housed all the lockers for the entire minor league invities there. Its a lot bigger than it looks. As I mentioned in an earlier post, I spent two springs working in that shack in good ol' Cocoa, Florida. It was a great experience (even met Sandy Koufax once, when the Dodgers brought their double A squad in for a minor league showdown on the vast wasteland of practice fields. He was a roving instructor that year, and dipped inside the clubhouse looking for a Gatorade. He even signed an autograph for me--great guy!) memories.....

Love this card just for the building....again i just let my imagination run for years thinking they held practice on a farm....