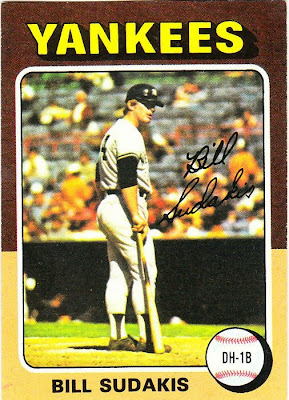 Card fact: This is the final Topps card issued during Bill Sudakis' career.

What I thought about this card then: Never saw it. If I did, it would be a favorite.

What I think about this card now: It's a rather stately pose by Mr. Sudakis. I don't know if he is looking for a sign or if someone is getting on his nerves. Perhaps it's Rick Dempsey (see below).

Other stuff: Sudakis was mostly a utility player during his career, but he began his career with the Dodgers and played 132 games at third base in 1969, hitting 14 home runs and batting (*gulp*) .234. He hit a home run in his first major league game, on Sept. 3, 1968 against the Phillies.

The Dodgers attempted to put him at catcher in the early 1970s, but Sudakis had chronic knee problems and L.A. ended up waiving him. After a brief stop with the Mets and a fairly successful year as a DH with the Rangers, Sudakis played for the Yankees, where he's known for getting into a brawl with fellow catcher Rick Dempsey at the end of the 1974 season in a hotel in Milwaukee. He later played briefly with the Angels and Indians, ending his career in 1976.

Sudakis made news in the '80s for being charged with attempting to sell cocaine to an undercover officer. But he apparently overcame that bit of nastiness and was a coach in California in the 1990s. 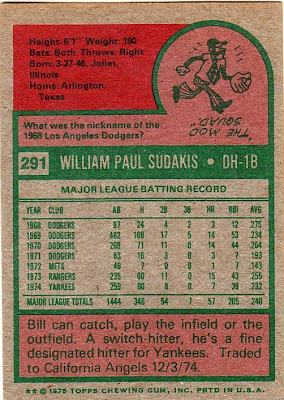 Back facts: I'm not sure if the timing of the trivia question is quite accurate. The late 1960s Dodgers squad was indeed known as "The Mod Squad," named after the popular TV show at the time. But "The Mod Squad" did not debut until the end of September 1968. Since the season was wrapping up at that time (and the Dodgers didn't play in the postseason in '68), it's unlikely they were called The Mod Squad in 1968. Nice pants, though.

Also, note the "traded to California Angels 12/3/74" in the write-up. Nice of Topps to squeeze that in there. Sudakis was traded to the Angels for Skip Lockwood, whose card we'll see later in the set (a card that also has issues). I wonder what was written in that spot before Sudakis got traded?

Other blog stuff: The No. 1 song in the country on this date was "Fallin' in Love," by Hamilton, Joe Frank and Reynolds. I always thought that was four people, but apparently I had an extra comma between Joe and Frank and it was only three.
Posted by night owl at 2:38 AM

That is a nice deviation from the normal card in this set. He looks like he's about to go Deniro on someone..."You talkin' to me?"

That's a great card! Reminds me of the attitude in the Ron Davis '81 Highlight card in the '82 set (interestingly, also a Yankee card).

The earliest reference to the Dodgers staff as the mod squad that I could find, was in May '69, so technically late 60's but... yeah, not like it was used through most of the late 60's like the trivia suggests

I have never seen this card before or the player. Great looking card for the 1975 set. That Topps year was sure bright with colors and distinguishes itself from the other years in a special way. Thanks for the cool post.

i think he is standing in amazement that he just struck out, again