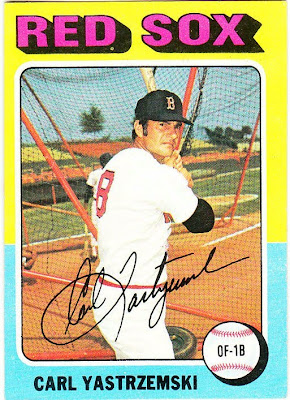 Card fact: This is the first time, outside of the various series within the set, that there has been the same color combination on three consecutive cards. Yellow-light blue is making a run for the title!! (Actually, it's got a long way to go).

What I thought about this card then: Didn't see it. But the '76 Topps Carl Yastrzemski is an all-time favorite, and was voted the best Yaz card of the 1970s over on the other blog (the 1975 Yaz was selected third).

What I think about this card now: Very Yaz-like. Not a lot of variation in his cards at that time. But that is as impressive of an autograph as you will see.

Other stuff: I don't feel like repeating myself, so if you want to read what I wrote about Yastrzemski, you can do it on your own time.

Yastrzemski had a long and prosperous Hall of Fame career with the Red Sox, replacing Ted Williams in left field, winning the Triple Crown, getting 3,000 hits, and enduring lots of Red Sox pain along the way. He was humble, dignified and much respected by Boston fans and people like me, who wasn't a Red Sox rooter, but respected the team and players like him. 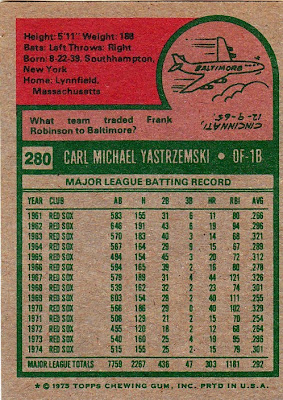 Back facts: I'm not sure if Reds fans appreciated the cartoon's insinuation. It almost reads like, "What fool organization got rid of Frank Robinson?"

Finally, I came within 9 days of posting on Yaz's birthday. Drat.

Other blog stuff: I was recently told that this site was used as reference for someone to make their own custom cards as prizes. That pleases me no end. I want "1975 Topps (it's far out, man)" to be a multi-facted tool for all to enjoy. Good deal!
Posted by night owl at 12:53 AM

The card, the Yaz and this blog!

It's a sickness, I know.

That said, I've always admired Yaz as a player and respected the way he went about hitting. As he was getting ready to retire in '83, I remember he was still a player who commanded respect whenever he walked up to the plate.

One of those cards as a kid that when you looked at the back of the card, you thought it was so cool that someone was with that one team for that long. It's still cool to see that as an adult.

If I haven't done so elsewhere, it's worth mentioning that a Google search for "Carl Yastrzemski with the big sideburns" brought me to this blog. I'm more than half way through; can't stop now...