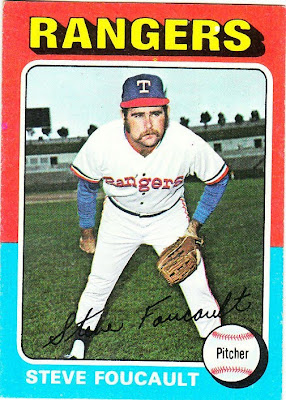 Card fact: There aren't too many cards in the set where the border colors match the team colors as well as this one. ... Yeah, I know, that's an opinion. I don't care.

What I thought about this card then: I've mentioned before that my brother and I liked the Rangers cards as kids. I had this card in mini form and it was probably my most favorite Rangers card. I'm not sure why. Maybe it's the fact that the colors match or maybe because Steve Foucault resembled a much younger version of my grandfather.

What I think about this card now: I have never known how to pronounce Foucault's name. As kids, we went around calling him "Fo-cat." I'm sure that's not right, but it has stuck in my brain all these years and that's what I call him. Not that his name comes up a lot.

Also, Foucault is clean shaven in his 1974 card -- his first card. Then, suddenly, he appears with plenty of facial hair on his 1975 card.

Other stuff: Foucault was a pure reliever in the majors. He pitched in 277 games in his six-year career and did not start a single one. He enjoyed probably his best season in 1974 with a 2.24 ERA, but was still effective for the next three or four years. He was traded to the Tigers for Willie Horton, had one good year for the Tigers, then was waived by Detroit in mid-season the following year. The Royals picked him up for a few games, and Foucault's major league career ended in 1978.

He is now a pitching coach for an independent league team in Evansville, Indiana. 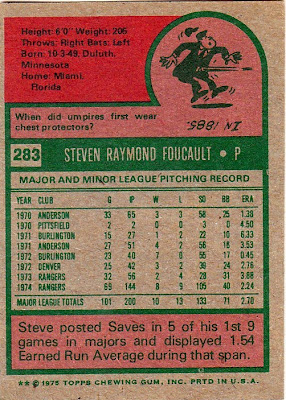 Back facts: I'm hoping that ball hit the ump in the stomach.

Other blog stuff: Here is big Foucault and little Foucault: 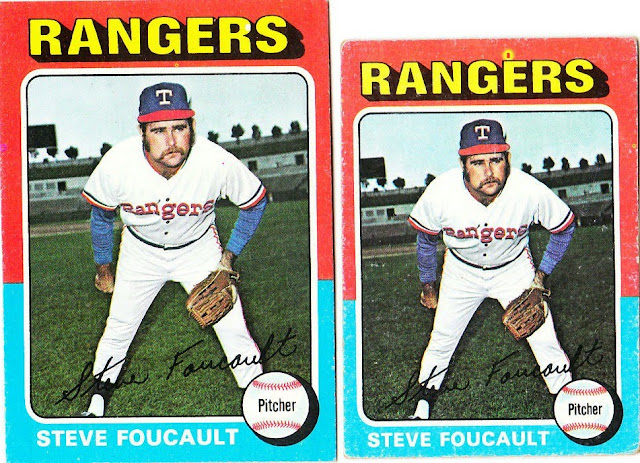 Interesting that he just came off a season where he had a 2.24 ERA and the write-up focuses on his ERA in his first 9 CAREER games.

I think it's pronounced foo-KOH.

Little Foucault may not have had a lower ERA, but merely the same ERA in a smaller font. ;)

another it's about to rain day card shot of the rangers....love it.....always love when the player looks more like a drunk neighbor then an athelete

I wonder if he was mistaken for the guy who played Chet on Emergency!