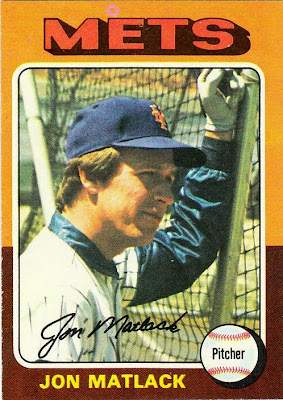 Card fact: This is one of several Mets cards in the set in which the player is posed near the batting cage. It's what makes many of the 1975 Mets cards so cool. Photos like that certainly take you out to the ol' ball game.

What I thought about this card then: Duh. It was cool.

What I think about this card now: It's still cool. Except now I notice that he's wearing his warm-up jacket under his uniform.

Other stuff: Jon Matlack was one of the Big 3 for the Mets in the early 1970s, along with Tom Seaver and Jerry Koosman, that gave New York one of the best rotations in the game. He won the National League Rookie of the Year Award in 1972, then proceeded to put up several good years for the Mets, finishing third in the N.L. in strikeouts in 1973 and in ERA in 1974. He was the co-MVP of the 1975 All-Star Game, along with Bill Madlock.

After a disappointing 1977, Matlack was traded to the Rangers in a massive four-team offseason deal. Matlack went on to finish second in the A.L. ERA race in 1978. His effectiveness began to decline after that and he ended his career in 1983. Later he coached in the majors and minors and is now the minor league pitching coordinator for the Tigers. 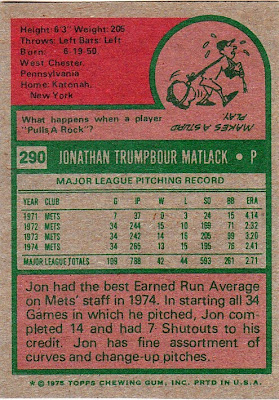 Back facts: I have never heard the "pull a rock" expression in all my years of watching baseball.

Also, Matlack's middle name is one of the all-time greats in the '75 set.

Other blog stuff: With this card, the "orange-brown" combination ties "green-light green," "purple-pink" and "pink-yellow" in a four-way tie for first place as the color combination used most often. All four have been featured 24 times.
Posted by night owl at 1:31 AM

Wow, that middle name must have family connections. I can't see anyone coming up with that one on their own. Matlack was my best friends favorite Ranger pitcher. I've never heard the "pull a rock" expression either.

Never heard of that expression either. One personalized jersey I would like to get would be a Rangers one of Jon. For a somewhat reasonable price. So far no dice though. Let me know if you ever need the scans of the mini and the OPC versions of this card.

imagine if the mets had kept nolan ryan and had a staff of
seaver
koosman
matlack
ryan!!

hmmmm maybe i'll do a stratomatic fantasy league seeing what would have happened.