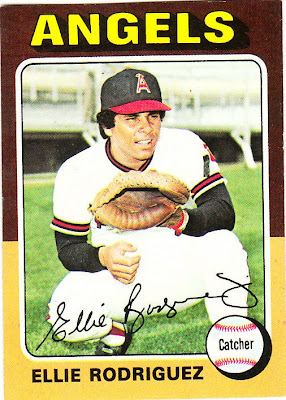 Card fact: This is the seventh card in the set of a player posed in a catcher's crouch. I would have thought there would have been more by now.

What I think about this card now: The cap reminds me very much of a cap I wore as a kid. But instead of the "A" on the cap, it had an "L.A." as in the old Los Angeles Angels. A well-meaning relative bought me a "Dodgers" cap that actually was a "Los Angeles Angels" cap, patterned after the Angels' caps of the 1960s. I didn't know any better at the time and wore it.

Other stuff: Ellie Rodriguez was coming off possibly his best year in the majors as he played in a career high 140 games and had a career high 395 at-bats in 1974. He came over to the Angels from the Brewers in an eight-player deal. Rodriguez was the semi-regular catcher for the Brewers. Before that he played for the expansion Royals and briefly with the Yankees.

Rodriguez ended his career as a back-up with the Dodgers in 1976 (his 1977 Topps card was the first Dodger I pulled that year). He is now a consultant and scout for the independent Atlantic League of Professional Baseball. 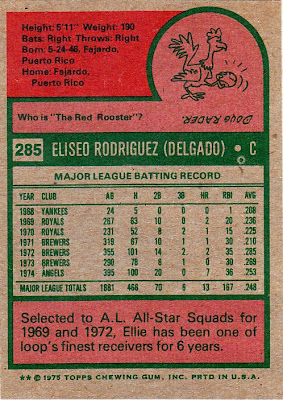 Back fact: It seems rather odd that Topps chose Rodriguez for a card number that ended in "5." Those numbers were usually reserved for semi-stars.

Also, the Red Rooster has been featured on the blog already.

Other blog stuff: On this date in 1975, Ralph Kiner, Babe Herman, Earl Averill, Bucky Harris and Judy Johnson were inducted into the Baseball Hall of Fame.
Posted by night owl at 3:34 AM

I think Ellie Clampett when I hear the name, but that's just me. Do you still keep in touch with any of your fellow childhood collectors?

Nope. I haven't seen any of them since before I entered high school.

I have a similar story to your LA cap. I was raised a Reds fan, but when I was about 4 or 5 years old someone sent me a Cubs cap, thinking it was a Reds cap (I guess since it had a red C on it). I wore it for awhile thinking I was wearing a Reds cap until my father set me straight, ripped the cap off my head, and bought me a real Reds cap. I must have embarresed him wearing this Cubs cap. I think I'm over the trauma now.

Ellie was no lady...he once beat the crap out of the Spaceman. Check out this excerpt from Bill Lee's "The Wrong Stuff":