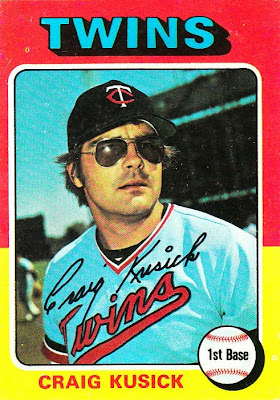 Card fact: This is the first Topps card of Craig Kusick.

What I think about this card now: If there was any yellow in the photo, this would be the card with the best-matched color border and photo.

Other stuff: Kusick was a first baseman and designated hitter who played nearly all of his seven-year major league career with the Twins. He was pegged as the replacement at first base for Harmon Killebrew, but became a DH after Rod Carew moved to first. He played part of the final year of his career, in 1979, for the Blue Jays.

The 35th anniversary of Kusick's major league record-tying feat of being hit three times in one game just passed on Friday. He was hit by a pitch three times in an 11-inning game against the Brewers on Aug. 27, 1975.

Kusick died from leukemia three days before his 58th birthday in 2006. His wife died of cancer nine months prior. 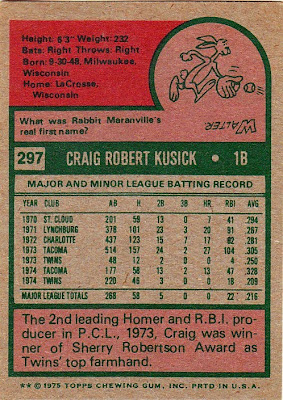 Back facts: You've got love seeing animals in cartoons.

Sherry Robertson was the longtime farm system director for the Senators and Twins organizations.

Other blog stuff: My father's favorite player, Ted Williams, was born on this date in 1918.
Posted by night owl at 12:53 AM

My first thought when I saw the card was Kent Hrbek. I'm tired and my vision is a little fuzzy, but I know that this was before Kent's time. This card is a bit of a departure from the previous one. Alan Foster looked contemplative, happy even, and Kusick looks a bit miffed. Maybe it's because there was no yellow in the picture so he knew the border would be good, but not perfect.

i think he is looking above at a passing jet, wishing he could be wearing his cool glasses while flying and not tagging some guy on the butt from the throw of vic albury trying to hold the runner on

I know this is 75 Topps, but there's an even cooler card of Kusick out there:

Nothing is cooler than '75 Topps.