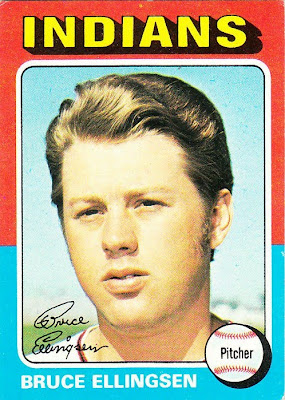 Card fact: This the first and last card of Bruce Ellingsen during his major league baseball career.

What I thought about this card then: Ladies and gentlemen, you are looking at the one card that neither me, nor my brother, nor my friends wanted. We would play games that would resemble Russian Roulette in almost every way except that instead of a firearm, we used a 1975 Topps Bruce Ellingsen card. If you were the person who ended up with the Ellingsen card, "bang," you were dead. Or you were at least doomed to a fate of owning this card and everyone in your childhood sphere KNOWING that you owned that card.

So you would play another game of Ellingsen Roulette until you didn't have it anymore (I have no idea why the other people who did not own the Ellingsen card would agree to another game, but they did).

There were several cards in the 1975 set that we did this for:

And a couple others I can't recall. But Ellingsen, far and away, was the least wanted.

What I think about this card now: I have already publicly apologized to Bruce for my childish behavior.

Other stuff: Ellingsen pitched in 16 games for the Indians and that was his entire big league career. He is known mostly for being traded from the Dodgers to the Indians for a 17-year-old named Pedro Guerrero. The trade happened on April 3, 1974, which probably explains why Ellingsen is hatless in this photo. In fact, he may be wearing a Dodger uniform here and his uniform collar was airbrushed in Indians colors. Oh, if I had only known as a kid that Ellingsen was a Dodger! 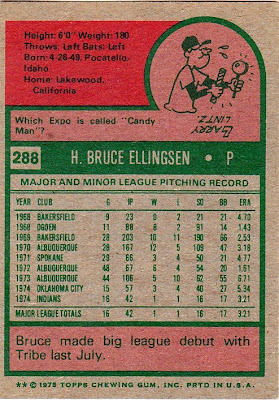 Back facts: Larry Lintz will appear on card No. 416 in the set. As far as I know, he doesn't look like Sammy Davis Jr., so either he did a mean impersonation or he had a sweet tooth.

Other blog stuff: Kenny Rogers -- the singer, not the pitcher -- was born on this date in 1938. I have never forgiven him for singing that "Lady" song.
Posted by night owl at 1:08 AM

Ugh, I always dislike hatless cards, unless the cap clearly fell/came off in the heat of the action.

We felt the same way about this one.

When I opened up the post and saw the card, my first thought was, "Hey! That's the guy who was traded for Pedro Guerrero! I didn't realize he stuck long enough in the majors to get a card!" In 1975, of course, that trade would have meant nothing to kid buying baseball cards (even a Dodgers fan).

Does anyone know any backstory behind that trade? It seems like kind of an odd deal -- a 17-year old with one year of experience in the low minors, for a soon-to-be 25-year old who looked like he was probably marginal major league material (no major league experience, 5-10 at AAA the year before).

I notice that the trade took place in early April. Based on the timing, the trade may have been prompted by Ellingsen not making the Dodgers' '74 major league roster (or the Dodgers otherwise not having room for him). I wonder if he had been designated for assignment, and the Indians just told the Dodgers to pick any player in the low minors who wasn't on a list of their top prospects.

So I guess Ellingsen was the "Old Maid" in your card collection.

As for him not wearing a cap, he obviously spent a LOT of time on that hair...no way was he messing it up with a cap.

How considerate of Bruce to keep his autograph off to the side, so as to not obscure the picture.

this was the FIRST card of my FIRST pack of baseball cards.....Living in CLE getting a CLE player.....wait by the time I got the pack he was long gone......for years i wondered where he went.....in stratomatic i had some nameless players....one of those nameless players became Bruce Ellingsen.....so he went on to mediocrity in my fantasy leagues!!

i was blessed to have both the mini and large version : )

I remember getting this card in 1975 and thinking that the photo was about 95% "head." This card has to have the highest "head to photo" ratio in the history of carddom. So much head in that photo. That's a lot of head.