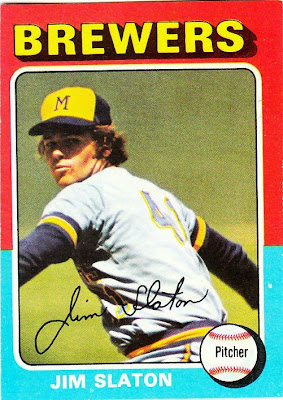 Card fact: Contrary to what this card would have you believe, Jim Slaton really does have hands. And forearms.

What I thought about this card then: It was one of my favorite cards in the whole set.

What I think about this card now: Slaton was in the midst of a typical 1970s metamorphosis. You'll know what I mean if you compare this card to this card.

Also, I used this card on the other blog to illustrate how long I have been collecting cards.

Other stuff: Slaton is the Milwaukee Brewers' all-time career victory leader with 117. He pitched for the Brewers from 1971-77. The Brewers then traded him to the Tigers for Ben Ogilvie. Slaton went on to win 17 games for the Tigers in 1978, but apparently didn't harbor any grudge against the Brewers for trading him, because after the season, he rejoined the Brewers as a free agent.

Slaton pitched five more years for Milwaukee, then was traded by the Brewers again, this time to the Angels. Slaton finished out his career with the Tigers. Since then, he has worked in the minors as a pitching coach and is currently the pitching coach for the Dodgers' Triple A team in Albuquerque. I am kind of hoping he makes the leap to the Dodgers' big club soon. He can't possibly do any worse with the pitching staff then what's going on up there now. 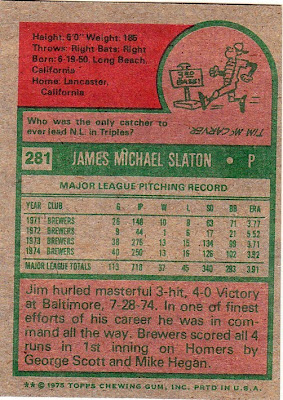 Back facts: Tim McCarver led the National League in triples in 1966. Since then, the only catcher to lead the league in triples was Carlton Fisk, who tied with Joe Rudi for the American League lead in triples with nine in 1972.

Other blog stuff: On this date in 1968, the Montreal Expos were officially born. I miss going to Olympic Stadium.
Posted by night owl at 2:25 AM

That Brewers cap looks like those cheap giveaway caps my dad used to get from all kinds of small businesses. I like the write up on the back of the card. Throwing a 3 hit shutout after getting a four run lead in the first...that's what you call a shutdown inning followed by another and another and...well, you get the point.