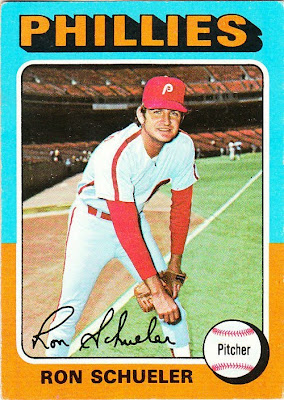 Card fact: This is Ron Schueler's first card in an actual Phillies uniform as he was traded from the Braves to the Phillies in December 1973. Topps featured Schueler in its TRADED set in 1974 -- capless and airbrushed into a Phillies jersey.

What I thought about this card then: I had the mini card. I thought he was a weird looking dude.

What I think of this card now: It's evident by his pitching pose that Schueler is a tall man. He's 6-foot-4, although he looks taller to me in the photo.

Other stuff: Schueler started out as a starting pitcher for the Braves and then the Phillies. But after some difficulty as a starter during the 1974 season, he was converted to a reliever (he'd still start ocassionally). He remained chiefly a reliever until the end of his career, which was in 1979.

Schueler then became a pitching coach for the White Sox, A's and Pirates before moving into the front office with the A's and then with the White Sox. He was the White Sox general manager for 10 years before being replaced by current White Sox GM Kenny Williams. Since then he's worked in scouting and assistant administrative roles with the Cubs, Cardinals and now the Nationals.

Schueler's daughter, Karey, was the first woman to be selected in the major league draft. A pitcher, she was drafted by the White Sox in the 43rd round in 1993 but never signed.

By the way, wikipedia says her name is "Carey," but there are numerous other references to "Karey." Meanwhile, Ron Schueler's wikipedia page mentions he has two kids, Jennifer and Christina. But no mention of Karey. Or Carey. Got to love wikipedia. 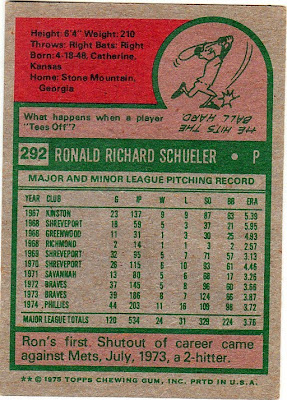 Back facts: Now that's a baseball expression I've heard of before.

Other blog stuff: Let's see the regular card next to the mini card. That's always fun: 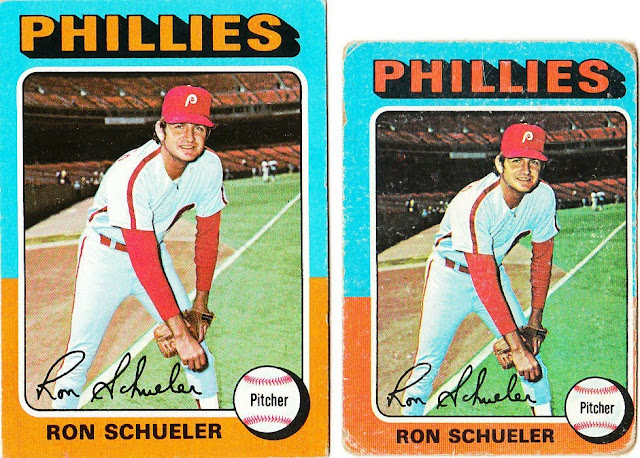 He looks like Mr. Fantastic...like he could stretch right off that card.