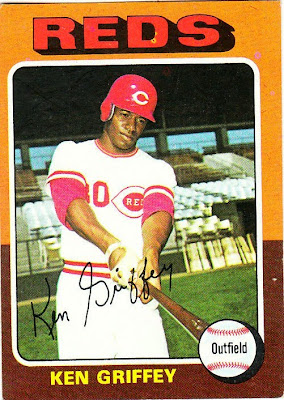 Card fact: This is Ken Griffey's first solo card. He appeared on a four-photo rookie card in the 1974 Topps set.

What I think about this card now: Not as iconic as his son's first solo card, but, damn, are those 20-plus bats lined up in the background? That's kind of cool.

Other stuff: Long before Griffey was known as "Ken Griffey Sr." or "Ken Griffey Jr.'s dad," he was a key part of the Big Red Machine teams of the 1970s. He was the Reds' regular right fielder and nearly won the National League batting title in 1976.

Griffey was also my hero for hitting a home run off of Dodger traitor Tommy John in Dodger Stadium in the 1980 All-Star Game. Griffey went 2-for-3 and won MVP honors as the National League won that game.

Later Griffey went to the Yankees and I liked him a lot less. He then went to Atlanta, returned to Cincinnati, then joined Seattle, becoming the first major leaguer to play in the same game as his son, and also the first to hit back-to-back home runs with his son in a major league game. His career seemed to last way longer than anyone expected it to, but it's a good thing for him that it did.

Griffey is now a coach in the Reds' minor league organization. 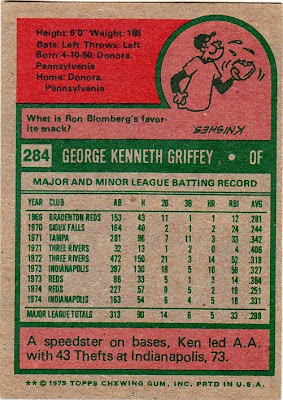 Back fact: The Ron Blomberg-knishes cartoon has appeared more than once on Topps cards. It's also on the back of Blomberg's 1973 Topps card.

"George Griffey Jr." just doesn't have the same ring to it, does it?

Other blog stuff: A happy 69th birthday to big Boog Powell today. We'll get to your card eventually, Boog. It's a great one.
Posted by night owl at 2:16 AM

That's a cool card. I like the bats in the background. I got to see George and George Jr. play together in Seattle. That was kind of a cool baseball moment.

I actually went to the 1980 All-Star game as a kid with my father and sat in the reserve seats way down the left field line. I still have the ticket stubs from the game. One of these days, I'll scan and then post them on my blog (which I need to take off of hiatus).

Loved Griffey as a kid. Loved this card.

Friends and I always joked that his sig looked like "Kim Sniffey."