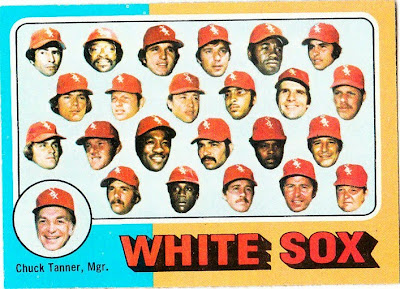 Card fact: I have two of them:

1. This is the fourth team card to use the light blue-tan color combination. That's more than any other color combo used on a team card.

The question: Why oh why did the White Sox get the floating heads in 1975? This has perplexed me for decades!

What I think about this card now: This has to be the goofiest card in the whole set. And there are a lot of goofy cards in the set.

Other stuff: The White Sox finished 80-80 in 1974 (what happened to the other two games?). They declined after that and Chuck Tanner was out of a job after the 1975 season. Chicago re-emerged in 1977 under Bob Lemon and "the Southside Hitmen." 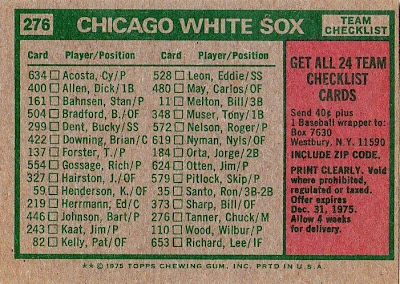 Back facts: Roger Nelson is listed in the right-hand column, about midway through. Nelson was purchased by the White Sox from the Reds in the fall of 1975, and Topps responded by airbrushing Nelson into a White Sox cap on his '75 card. But Nelson never played for the White Sox. He was released by the team in March of 1975. Oops.

Other blog stuff: Let's see if Topps left out anyone notable from the White Sox's 1974 team.

The White Sox used 40 players in 1974, and Topps featured 26 of them in the set, plus a guy who didn't play for the White Sox. But it didn't leave out anyone too notable. Bill Stein had the most at-bats for a person who didn't get a card, with 43. Up-and-coming Lamar Johnson batted 29 times and didn't get a card. Among the pitchers, poor Bill "Bugs" Moran pitched 15 games for the White Sox and started five, recording a 1-3 record. It would be his only major league season. But he never got a card.

So, here is where the White Sox rate with the other teams shown so far, in terms of percentage of players in the set from the respective 1974 squads:

While I feel bad for Bill Moran, I love the floating heads. Some of those guys have looks on their faces like they KNOW their heads are just floating there. Funny.

take your kid to work day at TOPPS? keep em busy with scissors and cut outs?????

Oh man, I don't think I've ever seen this card before and I LOVE it. Makes me want to seek one out.