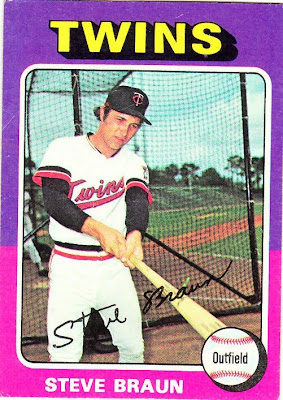 Card fact: This is the second straight "purple-pink" card. I don't like it when the same color combo is featured on back-to-back cards. It doesn't look good in the binder. It's like having a binder full of 1991 Fleer cards. The borders are bright, but they're all the same. No good.

Anyway, this card puts "purple-pink" back in a two-way tie with "pink-yellow" for the overall color combo lead with 24 cards each.

What I think about this card now: Miscut.

Other stuff: Steve Braun started out as an infielder for the Twins, but by 1974 was a regular starter in the outfield. Braun always hit well and could get on base, recording a lifetime .371 OBP.

He was selected by the Mariners in the 1976 expansion draft (who doesn't remember his horribly airbrushed batting helmet in the 1977 Topps set?). After a year-plus with the Mariners, Braun became known as a pinch-hitting expert, first with the Royals and Blue Jays and then with the Cardinals. He played in the World Series for the Cardinals in 1982 and returned to the postseason with St. Louis in his final major league season in 1985.

Braun now operates summer baseball camps and has his own web site, in which some of his baseball cards (including this one) are featured across the top of the page. 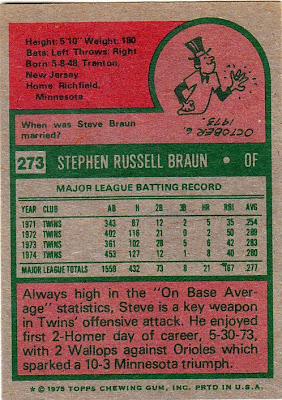 Back facts: OK, I'm going to pick this one apart. First the cartoon:

Why is it necessary to mention the date of Braun's marriage? Also, was it customary in the 1970s for grooms to wear top hats and bow ties with T-shirts?

I enjoy how they list "On Base Average" as if its some foreign, scientific word that no one knows. I also enjoy the capitalization of "Wallops." And there should be a comma after "Orioles."

On Braun's web site, if you click on the "Biography" link at the left, there is a more extensive gallery of his cards, apparently one for every year he had a card in a major set. There is no 1979 card shown (did he not have one in that year's Topps set?), and the post-1981 cards alternate between Topps, Fleer and Donruss (one of the the three for each year, not all three).

Two Wallops against Orioles? So he killed two birds with one stone or what? That was the mostest poorly writed thing on the side not the front of a card ever. In history. (Tongue firmly in cheek)

shouldn't both of his arms be extended on his faux swing??