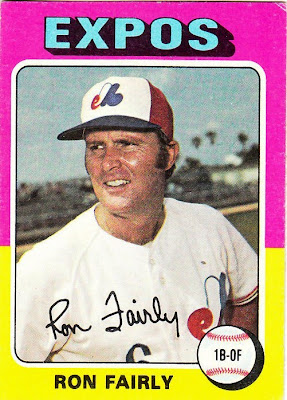 Card fact: I'm back! And the pink-yellow combo is back, too! This is the first card with a pink & yellow combo in 36 cards. And with this card, pink-yellow retakes sole possession of the color combo race with 24 cards.

What I thought about this card then: I'm having a tough time remembering when I pulled this card, but I did have it as a 9-year-old. I thought Ron Fairly was OOOOLLLLLDDD! But he was only 36 when this card came out.

What I think about this card now: I don't know what it is that makes players of this era look a lot older than they are. I'm going to say it's the way they wore their sideburns.

Other stuff: I goofed on the last post when I referred to Fairly as a four-decade player. Fairly came to the big leagues in 1958 as a 20-year-old, but he retired after the 1978 season, so he didn't quite make it to a fourth decade.

Fairly was a college star at USC and didn't take long to reach the big leagues with the Dodgers. He was a consistent hitter, but not spectacular. He was known for his ability to get on base, but not having any speed once he got there. He enjoyed an outstanding performance in the 1965 World Series against the Twins, helping L.A. to the title. His career began to decline after that, and he was traded to the Expos in 1969 for Manny Mota and Maury Wills.

That trade worked out quite well for the Dodgers, but Fairly's career was revived in Montreal and he enjoyed five good seasons there. After that he bounced between St. Louis, Oakland, Toronto and Anaheim. He later became known as a broadcaster for the Angels, Giants and Mariners. 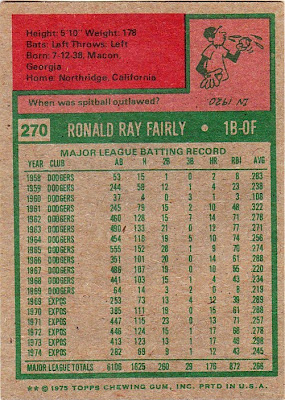 Back facts: I'm just noticing that Topps could have fit a stolen base column in there. Plenty of space there. 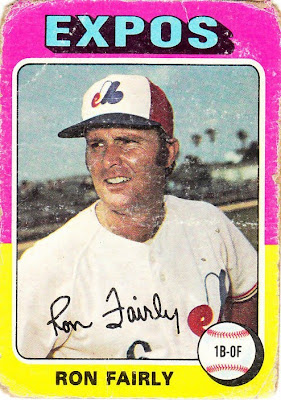 Oldie but goodie: That's the card that I pulled somewhere in 1975.

Other blog stuff: Both Charlie O. Finley and George Steinbrenner fired managers on this date. I suppose you could say that for several dates on the calendar.
Posted by night owl at 1:07 AM

Welcome Back! (I know you've been working on the other blog ... and I've been enjoying that, but there's something nice about being able to pull this one up every day.)

I dunno, it looks like Ron Fairly has some major crows' feet. Maybe players in the 70s didn't have sunglasses?

It's weird, EVERYBODY looks like +5 years in those '70's cards. Now, I can't put my finger on it, but doesn't this look like a picture Topps would have taken of a pitcher? I mean just at a glance, I was like, "That guy is a pitcher".

I'm back too, and catching up. Is it ironic (or coincidence) that you mention how he got on base, but was slow, AND that there was space on the back of his card for an SB column? I looked it up and he had 35 steals in 21 years and 10of those came in one year.

actually he looks a little younger now than i thought he was when i was a kid....i think seeing the long list of stats on back also taints the card as old.......squinting in the sun, thanks topps again for another stellar photo....will make anyone have crows feet.....

its how are dads looked when we were kids and they were old :)

i suppose steroids and HGH helps keep one young.....imagine how long some of these careers could have been with all the PEDS today