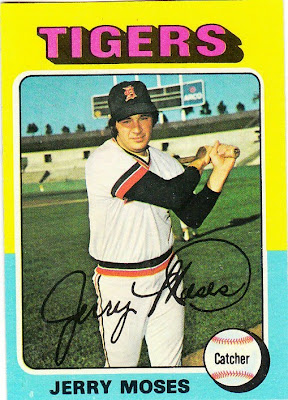 Card fact: This is the final card of Jerry Moses during his career. Topps gave Moses a goodbye present by spelling his first name "Jerry" after spelling his name "Gerry" on all of his other cards, from 1970 through 1974. I guess the signature must have tipped Topps off. It's hard to miss a signature like that.

What I thought about this card then: Never saw it. However, Moses' rookie card was one of the first 1970 Topps cards I ever saw. 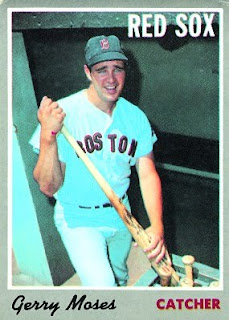 I always thought Moses was mopping out the dugout as his hands are positioned in the way you would hold a mop.

What I think about this card now: Moses' swing obscures the Detroit name on the front of his jersey, almost as if Topps was preparing for an impending trade and needed a pose in which all it had to do was airbrush the cap.

In fact, Moses was purchased by the Mets in January 1975, right before this set hit the streets.

Other stuff: Moses was a career backup for a variety of teams. He came up with the Red Sox and was actually an All-Star in 1970. But with Carlton Fisk coming up in the organization, Moses was traded to the Angels that offseason and bounced from team to team in ensuing years. 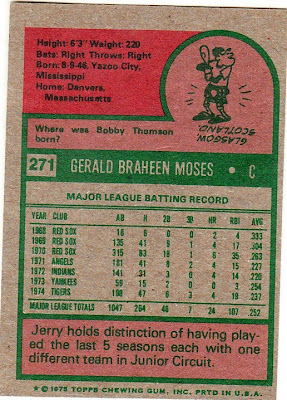 Back facts: I sure scanned that thing crooked.

Moses has one of the best middle names in the entire set in "Braheen." Also, I came within five days of posting this card on his birthday! I think that's the closest I've gotten yet!

One more thing: the write-up at the bottom reads like the person who was preparing to write it couldn't think of anything to mention, then suddenly realized that Moses had played for five different A.L. teams in five years. We have that person to thank for this wonderful piece of useless knowledge.

Other blog stuff: I am pleased to announce that someone has started a 1974 Topps blog! You can find it here. Please follow along as '74 Topps is also one of my all-time favorites, and this person has now relieved me of the obligation of starting a '74 Topps blog after I finish the '75 Topps one. Phew!
Posted by night owl at 2:30 AM

Gerry Moses's rookie card was not his 1970 Topps card; rather, it was 1965 Topps #573, where he shares the card with three other BoSox including Jim Lonborg. He also appeared on a '69 Topps card.

And thanks for letting me know about the 1974 Topps blog. I'll check it out.

I knew that would happen! I was so exhausted after work last night I didn't want to check one more thing. Bit me again.

A few things:
1. That is a great signature. How did they misspell his name year after year?
2. The first thing I thought when I saw the 1970 card is that he was sweeping the dugout. Funny.
3. I don't think you scanned it crooked. I think Topps added the tilt to the back of his card since they didn't get it on the front.