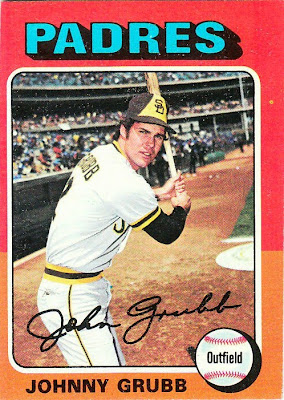 Card fact: I really want to look and see if this is the first player in the set to have repetitive consonants in both his first and last names, but I have to be up at an ungodly hour in the morning. So, someone, please do it for me.

What I thought about this card then: Never saw it. First card of his that I knew was his 1976 Topps card.

What I think about this card now: Behind Johnny Grubb, there appears to be a festive baseball crowd gathering in preparation for another Padres loss.

Other stuff: Grubb was an outfielder/first baseman/DH for the Padres, Indians, Rangers and Tigers. He started out quickly, finishing sixth in the National League Rookie of the Year voting in 1973. He then received the most playing time of his career the next two years, setting a San Diego franchise mark for doubles in a season (granted the Padres were only five years old at the time).

Grubb later settled into a supporting role for the Rangers and Tigers. He was on the Tigers' World Series-winning team in 1984. He played until 1987. After his pro career, he coached high school ball in his hometown in Virginia.

His wikipedia page has a weird uncited stat. It says that Grubb is the all-time leader among American League hitters when used as a pinch-hitter batting for the No. 9 hitter in the lineup. What? 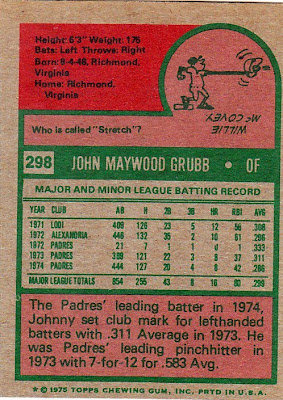 Back facts: The team isn't going very well when 42 RBIs and 127 hits makes you the best hitter on the club.

Other blog stuff: Hideo Nomo was born on this date in 1968. It's also the birthdate of Debbie Gibson. I only mention this because it means she's 40. Debbie Gibson is 40. Ho-ly crap.
Posted by night owl at 1:58 AM

One of the cards of my early childhood was a mid-1980s Johnny Grubb, either 1986 or 1987 Topps. Besides the funny name, I remember thinking that he resembled John Denver.

Wow, Brian, you've got a lot of time on your hands there at work.