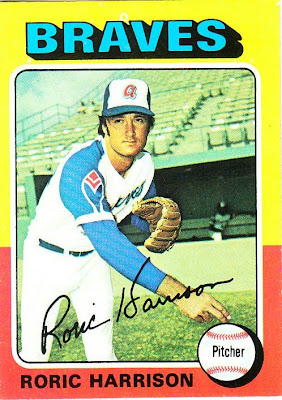 Card fact: The only guy in the history of baseball cards to have the first name "Roric" ... unless there's someone in some minor league set with that name -- in which case I know there will be someone somewhere who will point it out to me.

What I thought about this card then: I acquired this card in a large trade with my friend. I thought Harrison was extraordinarily tall. He's 6-foot-3, which is sort of tall, but especially tall to a 9-year-old.

What I think about this card now: I wish I could tell if that was Hank Aaron in the dugout. Whoever it is, they appear to be trying to prevent themselves from sliding backward down the bench.

Also, Harrison is clean-shaven here, but in his 1974 and 1976 cards he's wearing a mustache. Couldn't decide, I guess.

Other stuff: Harrison pitched mostly in the minors, but had five seasons in the major leagues as both a starter and reliever, mostly for the Orioles, Braves and Indians. While with Baltimore, he was the last American League pitcher to hit a home run before the advent of the designated hitter.

Harrison was involved in five trades during his career, which must have driven Topps a little crazy. In his final Topps card, Harrison is airbrushed into a Tigers uniform for the 1978 set. The Tigers signed him in April of 1977. But they then released Harrison in March of 1978. By the time some collectors got their card of Harrison, he had been released by the Tigers, signed and released by the Pirates, and signed by the Twins. 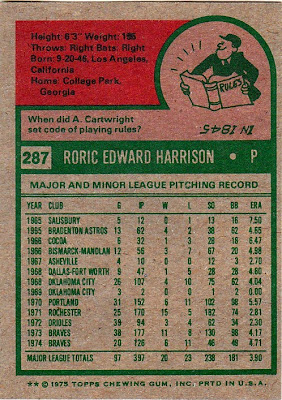 Back facts: Topps isn't going to let you know Cartwright's first name is it?

Other blog stuff: On this date in 1978, Don Sutton and Steve Garvey got into a clubhouse fight prior to their game against the Mets. It was my first clue that maybe everyone didn't like Garvey.
Posted by night owl at 1:24 AM

Are there 2 people over his right shoulder? They look like they are about to slide over the rail.

From what I've read and heard, Steve Garvey and Gary Carter are held in just about the same esteem by their former teammates for similar reasons.

never saw the card as a kid...wish i did....it would have been one of my favs...he always confused me growing up in CLE....i had his 76 card cleary showing he was an indian, but he never played for them that year...i would scan every box score....nothing....apparently we traded him for harry parker (who was featured earlier in the set)

Overall, Harrison hit six career home runs, the last five for the Atlanta Braves. On June 14, 1974, he defeated Bob Gibson in a head-to-head match-up at Atlanta-Fulton County Stadium and went deep off of the future Hall of Famer. Harrison finished the '74 game with a line similar to the one he posted in 1972: 1-for-3 with a sixth-inning home run.