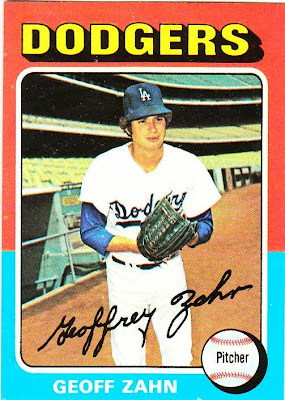 What I thought about this card then: This was the second Dodger card that I acquired in 1975, after Steve Yeager. For a long time, it was just those two Dodgers cards in my collection (it was probably just a matter of weeks, but everything seems longer when you're 9).

So, it was a cherished card, and I can't believe I forgot to scan the original version of it.

But after I saw his 1976 card, a new thought began to develop: I thought he looked like a circus clown. Something about the hair and the look on his face, it was all I could see when I looked at his cards from those two years.

What I think about this card now: It's very unusual seeing Dodger Stadium with no people in the stands. Also, these particular border colors go very well with the Dodgers uniforms.

Other stuff: Zahn didn't last long with the Dodgers. After toiling in the minor leagues for six years, he pitched 29 games for L.A., even taking Tommy John's spot in the rotation after he suffered a season-ending arm injury in 1974. But early in 1975, he was traded to the Cubs in the Burt Hooton deal.

Zahn didn't last long with the Cubs either, getting released. He signed with the Twins and became a steady starting pitcher for four seasons. He then signed as a free agent with the Angels and helped the team to the American League Championship Series with an 18-8 record in 1982 at age 36. He pitched in the majors until 1985. He is now a motiviational and Christian speaker with his own website. 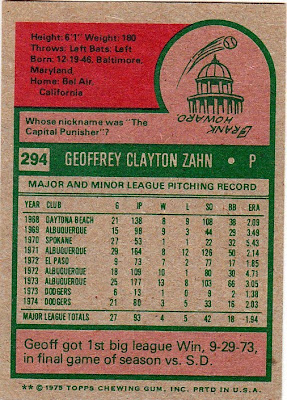 Back facts: When I was 9, a lot of the cartoons were so confusing. What was a Capital? Why was it being punished? Why was a baseball flying over that weird building?

But I loved Zahn's career 1.94 ERA so much that it didn't matter anymore.

I guess the Rangers decided to be give Thome his present one day early and let the Twins win the final game of the series.