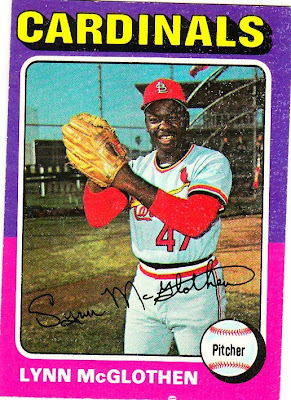 Card fact: This is Lynn McGlothen's first card as a Cardinal. He appeared in the 1973 set as a member of the Red Sox, but was not in the 1974 Topps set.

What I thought about this card then: I had the mini card as a youngster. I don't recall thinking anything special. McGlothen's smiling face on his 1976 Topps card attracted my attention more.

What I think about this card now: I don't know what that structure is in the background. Kind of odd-looking.

Other stuff: McGlothen's best season came in 1974, his first year with the Cardinals and his first full year in the majors. He went 16-12 with a 2.69 ERA in 31 starts. He made the All-Star team and finished 9th in the Cy Young voting. The following year wasn't as good, but he still went 15-13.

After a sub-.500 year (despite throwing four shutouts), he was sent to the Giants for Ken Reitz. Later, he was traded to the Cubs, where he spent a couple of years in the starting rotation. Elbow problems hampered McGlothen late in his career, and he finished out with the Yankees in 1982.

McGlothen died two years later in a mobile home fire. McGlothen and another woman were overcome by smoke. The woman had gone back to rescue McGlothen after saving her two daughters. McGlothen was 34. 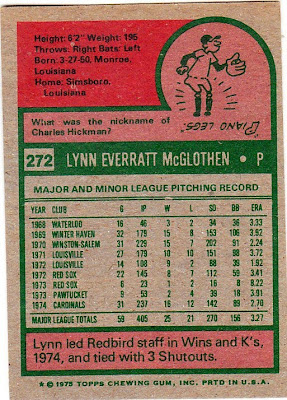 Back facts: Charles Hickman was a turn-of-the-20th-century player who competed for a variety of teams. It seems Topps is going a long way back to get a trivia question.

Other blog stuff: On this date in 1975, the movie "Rollerball" debuted. It's difficult to sum up Rollerball, but basically it's a story about a future society (it takes place in 2018) in which the world is controlled by a single corporation that provides for everyone's needs. People are free to pursue whatever entertainment or leisure that they want, and one of the most popular is a game that resembles roller derby but is super violent and allows for the use of motorcycles and karate moves. ... I can't explain it better than that other than to say "it was the '70s."

Oh, here's your look at the regular McGlothen and the mini side-by-side: 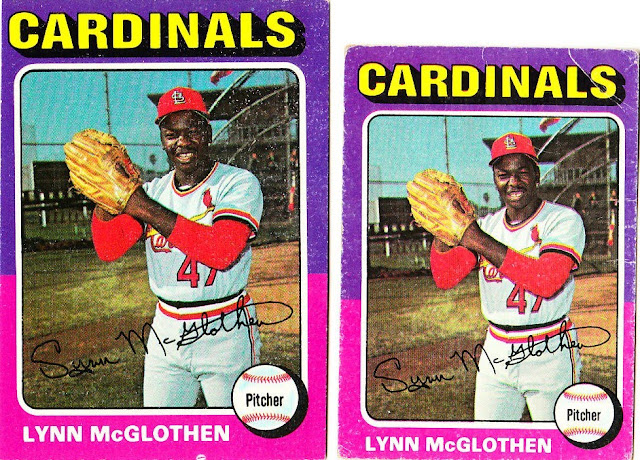 So sad when a major leaguer ends up living in a mobile home. So sad when anyone dies in a fire.

I had something stupid to say about the structure and then I read about his tragic death. It didn't seem funny after that. Sometimes I forget that a lot of these guys are gone.

I had a girl cousin named lynn, so i was always confused how a boy could have the name lynn.