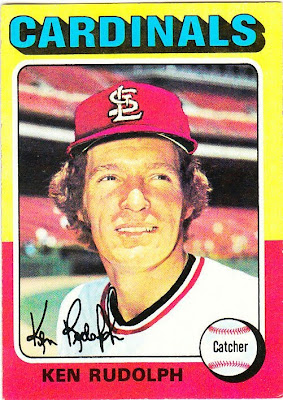 What I thought about this card then: Never saw it. Didn't know Ken Rudolph existed until just a few years ago.

What I think about this card now: Painting the interlocking St. Louis logo on an airbrushed cap must've been a bitch.

Other stuff: Rudolph was a career back-up catcher, mostly for the Cubs, but he also played for the Giants, Cardinals and Orioles over nine seasons. He spent the 1974 season with the Giants. He was then traded to the Cardinals with relief pitcher Elias Sosa (also airbrushed into a Cardinals cap in the '75 set) for catcher Marc Hill. The October deal didn't leave Topps enough time to get Rudolph in a Cardinals uniform, so you have the mess you see before you.

Rudolph is now a high school baseball coach in Phoenix, Ariz. You can see a brief video interview with him from 2009. 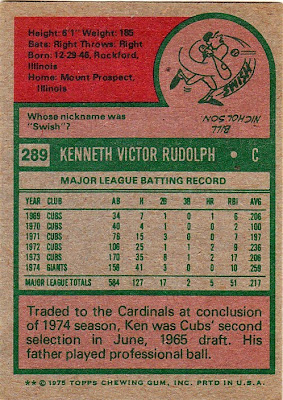 Back facts: The cartoon helps explain why Bill Nicholson was nicknamed "Swish." Nicholson was a slugger for the Cubs in the 1940s and nearly won MVP honors in back-to-back years. His nickname came because of his mighty swing, but also because he struck out a fair amount. But his totals are nothing compared with the strikeout totals that today's players produce.

Other blog stuff: On this date in 2007, the Rangers set an American League record for runs in a game by thumping the Orioles 30-3. The same two teams are playing each other today. (Yes, that was my attempt to wake up the Rangers).
Posted by night owl at 2:37 AM

I met Rudolph at a card show a few years back. It was in Chicago and he was amazed at the number of people who turned out for him. He was super nice.

It worked, they won. Thanks!

I second Spiff...it worked. As for your comment on my post, I don't think you jinxed them. Not yet anyway!

"Swish" Nicholson is (to date) the last major leaguer to come from my alma mater, Washington College. There's a statue of him in the historic downtown area, and his 1952 Topps card (mentioning his schooling on the back) is one of the highlights of my collection. Some day I'll have to get one of his Bowman cards, which actually list him as Bill "Swish" Nicholson.