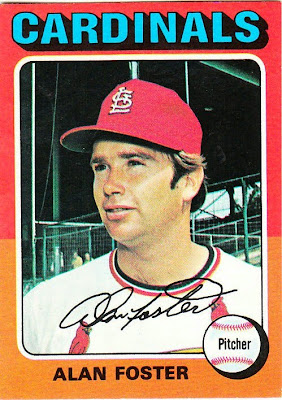 Card fact: This is one of three cards in the set featuring a player with the last name of Foster. The others are George Foster and Leo Foster.

What I thought about this card then: If you collected cards as a kid, then there was probably a point in which you developed an irrational attachment to a card of a certain player. This player was not on your favorite team, wasn't a star, and there was nothing exceptional about the photograph. Yet, for some reason, you thought he was the greatest player on the greatest card.

This is that card for me. I really, really wanted Alan Foster to become a great pitcher. I remember looking at the back of this card, seeing that he began his career with the Dodgers, and being sad that the Dodger got rid of such a terrific player.

Looking at this card now, and knowing what I know about Foster's career, I have no idea why I behaved the way I did.

What I think about this card now: The stadium background looks cool. Otherwise I just stare at it and try to figure out what I saw in this card when I was 9.

Other stuff: Foster was drafted in the second round by the Dodgers in 1965. He played in the majors for a few years for L.A., but was traded to Cleveland for backup catcher Duke Sims. Later, he was traded along with the player I just featured -- Vada Pinson -- to the Angels. The Cardinals purchased him two years later, and he had his best season in the majors for St. Louis in 1973, going 13-9 with a 3.14 ERA. But he was traded again to San Diego, where he stayed until ending his career in 1977. He had a career 48-63 won-loss mark. 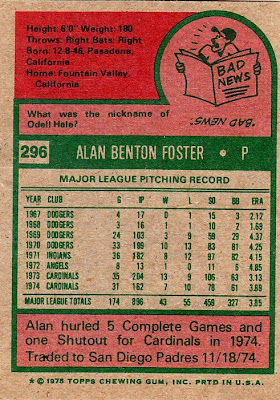 Back facts: Odell Hale was the starting second baseman for the Indians in the 1930s. I don't know why he was "bad news."

Also note the Topps alert that Foster was traded to the Padres too late for it to get a photo of Foster as a Padre. "We're really, really trying," Topps is saying.

Other blog stuff: Here is the original card that I thought of so fondly: 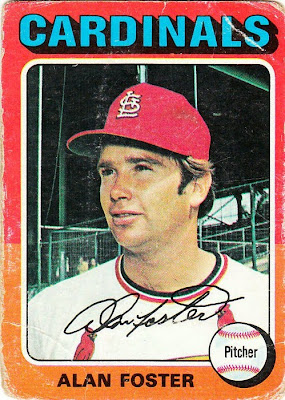 I still don't understand what the fuss was about.
Posted by night owl at 2:25 AM

Isn't it odd how we get attached to certain cards, usually with no definable reason. I guess that is part of the joy of collecting.

The color scheme on this card works well with the Cards colors.

looks like the honey i shrunk the kids guy (moranis)

irrational attachment with no definable reason.....love it...sums up why i am reading and loving this blog