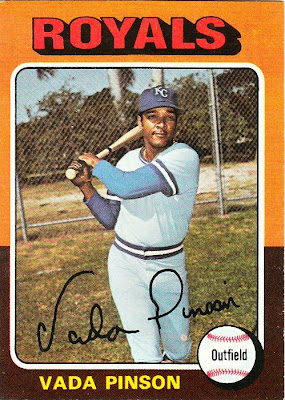 Card fact: This is Vada Pinson's first card appearance in a Royals uniform. But he bounced around a lot at the end of his career.

What I thought about this card then: I didn't see it. But I associate his 1976 Topps card with my friend Jeff from Kansas, the Royals fan.

What I think about this card now: It looks like Pinson got trapped in the lion exhibit at the zoo.

Other stuff: Pinson was one of the top offensive players of the 1960s with the Cincinnati Reds, enjoying most of his success in the early part of the decade, ranking among the league leaders in several categories. He could hit home runs and he could steal bases.

After 11 years with the Reds, he was traded to the Cardinals. He then skipped around to the Indians, Angels and Royals. After his career ended in 1976, he became a coach for several teams (he's even featured on a coach card in the 1982 Donruss set).

Pinson has received a lot of backing for induction into the Hall of Fame, but he hasn't come too close to election. He's still eligible for election by the Veterans Committee (I wouldn't hold my breath). 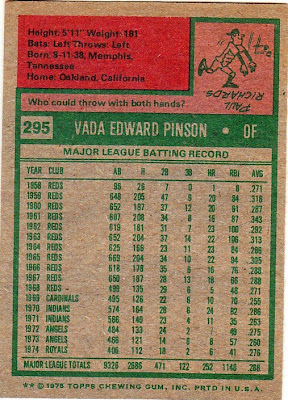 Back facts: Paul Richards was a major league catcher for several teams (as well as manager, executive, and pretty much everything). The throwing with both hands refers to his minor league days when he once pitched with both hands. I don't think he ever threw with both hands as a catcher. That'd be a little pointless.

Other blog stuff: "Orange-brown," the "candy corn design," has just taken the overall lead in the color combo race with its 25th card. It can bask in its glory for another 10 cards or so, then the lead will change again.
Posted by night owl at 3:59 AM

I think they took that picture at the playground backstop from my elementary school in central Texas. Well, probably not, but it looks the same.

Thanks for clearing that up about the cartoon. I actually laughed out loud at the picture of a catcher throwing with both hands. I wonder if that's how the Rangers got Jarrod Saltalamacchia straighteded out before they traded him.

Everyone can throw with both hands. It's just a question of how effectively...