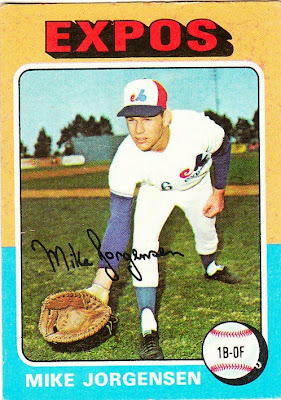 Card fact: This is only the second card in the set that shows a player posed in a first baseman's stretch. The other one was a long time ago.

What I thought about this card then: Me no see.

What I think about this card now: I grow more and more nostalgic for the Expos uniform by the hour.

Other stuff: Mike Jorgensen had a surprisingly long playing career for someone who reached 400 at-bats in only two seasons. He lasted 18 seasons, but his finest years were with Montreal in the mid-1970s. He came over to the Expos from the Mets in the same deal that sent Ken Singleton to the Expos for Rusty Staub.

Jorgensen later played for Oakland, Texas, the Mets again, Atlanta and St. Louis. He was the victim of a bean ball while with the Rangers and doctors later found a blood clot, caused by the beaning, that could have killed him (A serious incident, no doubt, but Jorgensen's wikipedia page is a little melodramatic).

Jorgensen later managed in the Cardinals organization, and briefly managed the Cardinals before Tony La Russa's hiring in the mid-1990s. He's worked in player evaluation for the Cardinals ever since. 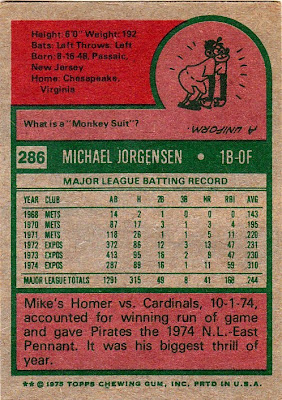 Back facts: I have three of them.

1. I came the closest to featuring a card on a player's birthday with this card. Jorgensen celebrated his 62nd birthday on Monday.

2. I've heard of a tuxedo called a monkey suit, but never a baseball uniform.

3. As the write-up says, Jorgensen's home run did indeed clinch the N.L. East title for the Pirates. The Pirates and the Cardinals each began Oct. 1, 1974 with identical 86-74 records. The Pirates played the Cubs that day and won 6-5. The Cardinals played the Expos and led 2-1 going into the bottom of the eighth inning with Bob Gibson on the mound. With two outs, Willie Davis singled and stole second. Jorgensen then delivered a two-run homer off Gibson to give the Expos the 3-2 lead, the eventual margin of victory. That put the Pirates ahead of the Cardinals by a game, and clinched the division. (The Pirates played another game on Oct. 2 -- perhaps a makeup game? But the Cardinals were done for the season).

Interesting that Jorgensen eliminated the Cardinals and then ended up working for St. Louis for all those years.

Other blog stuff: Former Mets pitcher, current Mets/TBS broadcaster Ron Darling was born on this date 50 years ago.
Posted by night owl at 2:43 AM

I really love the pose shots from the days gone by. Especially when the player is posing for his defensive position. This is one of my favorite poses in all my collection.

As an Expos fan Mike Jorgenson was one of my favourite players back in the day. I didn't have this card, but I got one from the previous season, when they used to throw in one old card with the new series. I Got a Roberto Clement and a Willie Mays that way, and even got an old Tom Seaver card.
In the Jorgenson card I had, he was holding a bat.