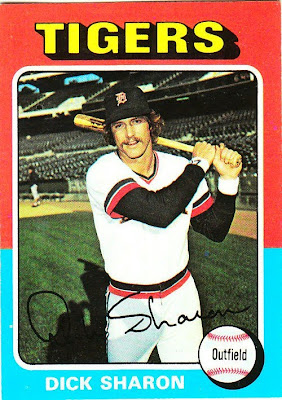 Card fact: This is the final card of Dick Sharon issued during his playing career. He had only two Topps cards.

What I think about this card now: I love the shadow behind Sharon. Is that a shadow of the photographer crouching, preparing to take a photo of Sharon? I hope so. That would be classic.

Other stuff: Sharon had a brief career in the major leagues, lasting three seasons. He played for the Tigers in 1973 and 1974 and the Padres in 1975. He was a solid fielder, which made up for his career .218 batting average.

Sharon did have the honor of being traded for Nate Colbert, Willie Davis and Dick Drago. Of course, those were three separate trades, and the Davis deal was the only straight-up deal. Davis went to San Diego at the tail-end of his career and Sharon went to St. Louis (he never played for the Cardinals). 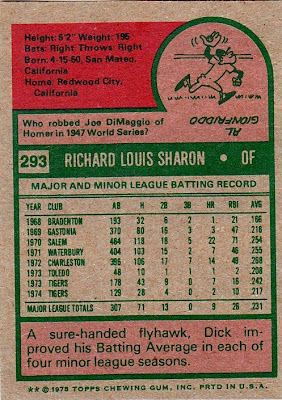 Back facts: I really need to start keeping track of how many cartoons in this set mention the Dodgers. It has to be around 20 now.

Also, the write-up must be addressed:

1. "Flyhawk"? Did they go back to the 1940s for that term? Only with the help of the rest of the sentence can I surmise that "flyhawk" means that Sharon was a good fielder.

2. And what a condescending sentence it is. I suppose it's better than, "his hitting sucks, but he can catch the ball."

Other blog stuff: On this date in 1975, former Houston Astros player Morgan Ensberg was born. If you haven't checked out his blog, you should. It's very interesting and insanely informative. Surely one of the best ever produced by a player.
Posted by night owl at 1:11 AM

My first thought was that IS the photographers's shadow. I don't remember ever seeing that on another card. Of course, it's not like I've seen them all. I've never heard the term "flyhawk" either.

Frankly, Dick Sharon sounds like the name for a C-list adult films actor.

According to baseball-reference.com, Sharon was traded five times during his pro career. For a guy who played less than three full seasons in the majors, that seems like a lot. Three of those trades happened during the offseason between the 1975 and 1976 seasons, after which Sharon would never play in he majors again.

Sharon originally started out in the Pirates' system, was traded to the Tigers before he made it to the majors, then went to the Padres, then between the 1975 and 1976 seasons bounced to the Cardinals to the Angels to the Red Sox. He spent the '76 season playing for the Red Sox at AAA.