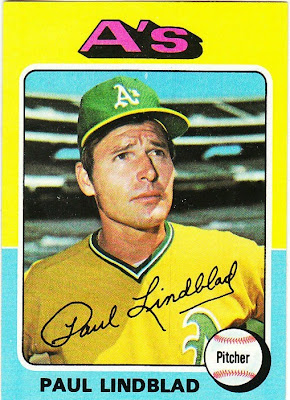 Card fact: Quite a come down from his previous card.

What I thought about this card then: I confess, I thought the A's were cool back then. I know they beat my team in the 1974 World Series, but I was too young to follow that Series, so I didn't know the pain that the A's caused. I just knew they won a lot, so I liked getting A's cards.

What I think about this card now: That is one intense stare by Paul Lindblad. I hope everyone is OK in the bleachers.

Other stuff: Lindblad was an often-used middle reliever who pitched mostly for the A's, but also briefly for the Senators/Rangers and the Yankees. After seven-plus years with the A's, Lindblad was traded to the Senators (who became the Rangers during Lindblad's stay) in the Mike Epstein-Darold Knowles deal. Lindblad led the American League in appearances with the Rangers in 1972.

Lindblad returned to the Rangers in 1977, then went to the Yankees, then to Seattle. He never played for the Mariners. He died on New Year's Day in 2006 after a lengthy battle with Alzheimer's Disease. 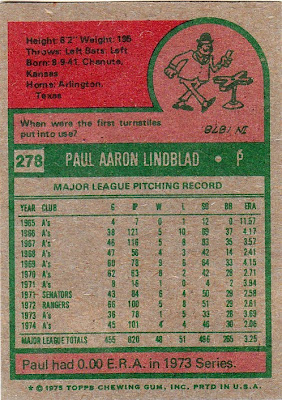 Back facts: Lindblad appeared in three games against the Mets in the 1973 World Series. He pitched 3 1/3
innings, allowed four hits, struck out one, walked one and didn't allow a run.

Other blog stuff: On this date in 1974, Jorge Lebron, made his professional debut at shortstop for the Phillies' Class A team. He was 14. He is the youngest person ever to play professional baseball in the U.S.
Posted by night owl at 1:08 AM

More death...I just read your other blog. I assume he has a '73 card in a Rangers uni so I need to check to see if it is one I have.