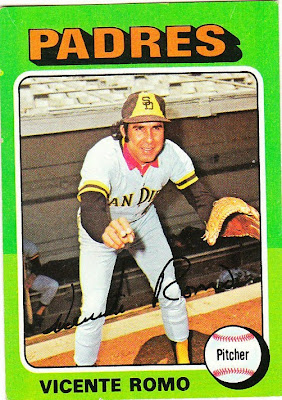 Card fact: This was Vicente Romo's last Topps baseball card -- until he re-emerged in the major leagues in 1982 and appeared in both the Topps and Fleer sets in 1983.

What I thought about this card then: Not part of my collection then.

What I think about this card now: That is more of a Frankenstein-I'm-coming-to-get-you pose than a pitching-follow-through pose. ... And what's with the red collar?

Other stuff: Romo is the most successful pitcher in the history of the Mexican Pacific League and a member of the Mexican Baseball Hall of Fame. He holds the MPL record for career victories with 182, earned-run average (2.38), strikeouts (2,038) and complete games (178). He pitched in the league for 24 years.

But Romo also pitched in the major leagues for Dodgers, Indians, Red Sox, White Sox and Padres. He began with the Dodgers in 1968, pitching in just one game. L.A., after acquiring Romo in the Rule 5 draft, returned him to the Indians, where Romo enjoyed a fine season, going 5-3 in 40 games with a 1.62 ERA.

Romo pitched in the majors until 1974, returning to the Mexican League after the season and continuing the standout career that he left in the late 1960s. After several strong seasons, he was 7-0 with a 1.54 ERA in 1982 when the Dodgers acquired him again in their bid for a division title. Romo started six games, pitched in 15 and had a 1-2 mark and a 3.03 ERA, but L.A. didn't make the playoffs. Romo returned to Mexican ball for the 1983 season and played four more seasons before retiring.

Romo's younger brother, Enrique, also pitched in the majors and was a key figure for the Pirates during their run to the 1979 World Series title. 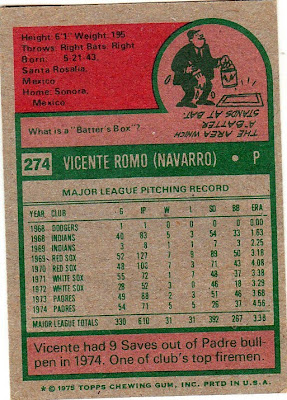 Back facts: The card says Romo's birthday is May 21, but baseball-reference.com says it is April 12.

Also, the answer to the trivia question is missing the word "in" as in "the area in which ..."

Other blog stuff: On this date in 1975, Charlize Theron was born in Benoni, Gauteng, South Africa. There is nothing I can say to properly express what she means to the male species, except "wow."
Posted by night owl at 1:27 AM

I think Vincente and Danny Boone hold the record for longest disappearance between regular issue cards.

Someone once commented about Charlize Theron "She's so beautiful, I would drink her dirty bath water" I have no idea what that means, but it gets the point across.

I think the guy in the dugout has the worst seat in the ballpark, at least at that moment. Also, I'm now distracted by thoughts of Charlize Theron and her bathwater.

i would have thought he was italian growing up.....

...hmmmm i still think the name sounds italian....i am sticking with my story