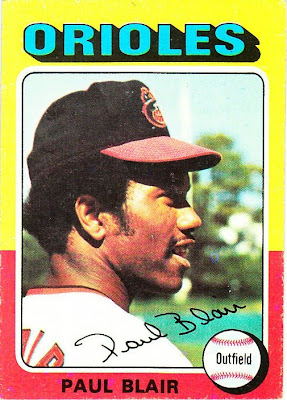 Card fact: This could be the best profile shot in the set. I'm not sure. There haven't been too many pure profile shots so far. Rick Monday is one. He'd have to be a contender. Perhaps I should start a poll.

What I thought about this card then: Not on my radar.

What I think about this card now: It has a hopeful feeling to it. Blair appears to be looking toward something with a touch of wonder or amusement or both. I like it.

Other stuff: When I was a kid there was one player who was known to play center field better than anybody else, and that person was Paul Blair. Most of Blair's career was before my time. I only knew him as a little-used Yankee. But I heard from others that Blair could not be topped in the fielding department.

Blair won eight straight Gold Gloves between 1969-75. He supplied some key offensive and defensive plays during the Orioles' 1966 World Series win over the Dodgers, and was a consistent figure in the strong Orioles teams of the late 1960s and early 1970s. During the end of his career, he was traded to the Yankees. His most famous moment as a Yankee was probably his fringe role in the on-air dugout confrontation between Billy Martin and Reggie Jackson during a game in 1977. The dust-up began when Martin sent Blair out to replace Jackson in the outfield after Jackson misplayed a ball hit by the Red Sox's Jim Rice.

After his career, Blair was a coach and instructor. 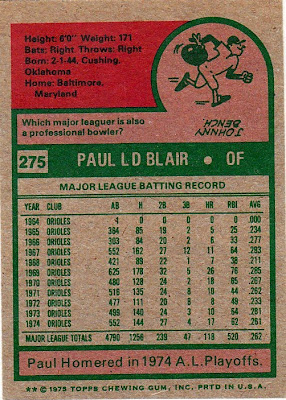 Back facts: The "L D" middle name of Blair's is a complete mystery to me. ... So, too, is Johnny Bench's career as a professional bowler. I can find a couple of references to the fact that Bench "indeed was a pro bowler," but no other details. I'll have to do further research.

Other blog stuff: On this date in 2000, the Dodgers hit six home runs against the Cubs. Four of the home runs came in the fourth inning. The other two came from pitcher Darren Dreifort. Wow.
Posted by night owl at 2:39 AM

all sources list paul blair's middle name as "L.D." so either it's a harry truman thing, or a big secret we aren't supposed to know...

Monday's profile is good. Blair's is better. (In my opinion ... or imo as the kids would say.)

I'll cast my vote for Blair if the poll goes up. I like the random Dodgers homer totals. Dreifort must have been juicing that day.

i am surprised at the homers he had...much higher than i would have thought

My earliest memory of Paul Blair is my 74 "card"of him. It actually features galhlord perry on the front and blair's stats on the back! I wonder if that is worth anything today!?