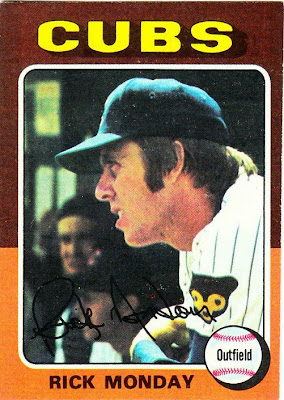 Card fact: This is another one of the cards that appeared in the pack that I shoplifted when I was 9.

What I thought about this card then: Man, I hope my parents don't find out.

What I think about this card now: I've always liked this card. It's a glimpse of Monday and his teammates peering out of the dugout.

Other stuff: Rick Monday, of course, is a proud part of Dodger history with his home run against the Expos in the clinching game of the Division Series in the 1981 playoffs. It helped me forgive him for what was a sporadic career with L.A., and the fact that the Dodgers traded away Bill Buckner to get Monday.

Also, Monday's most famous moment as a player was saving the American flag from being burned by two protesters in the outfield of Dodger Stadium in 1976, when he was a member of the Cubs. And how did the Cubs reward him? By trading him to the Dodgers after the season. But Monday got to win a World Series five years later with L.A.

Monday is now a broadcaster for the Dodgers. 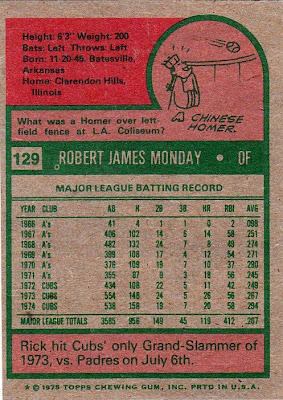 Back facts: "Chinese home run" is a derogatory term, meaning "cheap home run." The left field fence in the L.A. Coliseum was only 251 feet away from home plate when the Dodgers played there from 1958-61. Apparently, the reference to the Chinese comes from the fact that Chinese immigrants worked for little pay during the early 20th century. Yeah, real pleasant stuff. 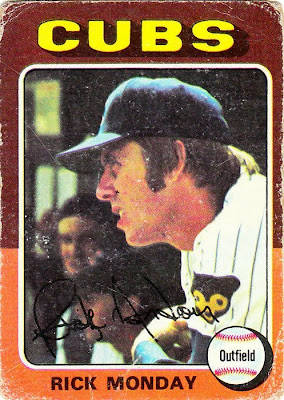 Other blog stuff: Brown-and-orange are very '70s colors. I'm going to try to come up with something '70s related for this color combination. I can't use the Burger King combo because I used that already. But if anyone has any ideas, let them fly.
Posted by night owl at 1:54 AM

I'm still a little taken aback by the "Chinese" Homer reference on the back of the card. I'll go with "beef and cheese enchilada" for the color combo because that is what it looks like to me.

Monday is a class guy all the way. It was a thrill talking to him in the Dodgers clubhouse.

Chinese Homer. Wow. I can't imagine that would fly today.

Color combo suggestion: 'the rec room' because it reminds me of the shag carpeting and cheesy wood paneling that was so popular then. And for some reason any TV room in the basement had to be called a 'rec room.' We were too poor to have a rec room. Had to watch TV in the living room like all the poor saps in the fifties and sixties had.

It kind of reminds me of the color scheme of the Brady's kitchen.

I think the "Chinese Home Run" reference as being a cheap home run really comes more from the many cheap toys and trinkets that one could buy in Five & Ten stores, that would say "Made In China" on the back. Back then, if you bought something "Made in China", or, later, "Made In Taiwan", it was more likely to be a cheap pencil sharpener or tin wind-up doggie than a smart phone or iPad.