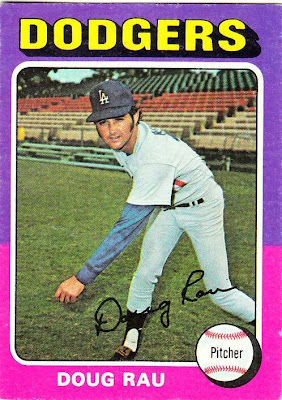 Card fact: I'm not 100 percent sure on this, but I believe this is the only '75 Topps card that I have that I also have in mini form and O-Pee-Chee form. The rare '75 trifecta!

What I thought about this card then: Doug Rau was a childhood favorite. I rooted for the underdog quite a bit as a kid, and Rau was the No. 4 starter in the Dodgers starting rotation of my youth. You can't get much more underdog than a No. 4 starter.

What I think about this card now: Was this photo taken at Vero Beach? Did the Dodgers color code the bleachers at their spring training site to match the Dodger Stadium seat coloring? If they did, that is awesome.

Other stuff: As mentioned, Rau was a key part of the Dodgers' pitching staff during their success of the late 1970s. The rotation that I knew growing up was: Don Sutton, Tommy John, Burt Hooton, Doug Rau and Rick Rhoden. I badly wanted Rau and Rhoden to become stars. They didn't reach the star level, but they did do pretty good for themselves.

Rau reached double figures in wins for five consecutive seasons with the Dodgers. His 1977 World Series showing was plagued by a famous mound argument with Tommy Lasorda (Lasorda sets an all-time record for cursing during the 3-minute conversation). But Rau was a bit more effective in the '78 World Series.

Rau's first major league at-bat was a memorable one -- he tripled. It took another 35 years before another pitcher tripled in his first MLB at-bat. 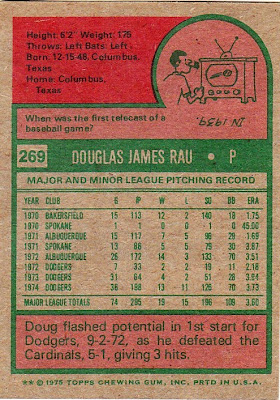 Back facts: This is one of my favorite cartoons in the set. Apparently sports fans always smoke pipes while watching television.

Other blog stuff: I'm taking another short break on this blog. I'll resume with a card of a four-decade player in a few days.
Posted by night owl at 12:36 AM

Doug Rau was a favorite of mine as well. One of the most exciting Dodger games I attended as a kid was a Doug Rau near no hitter against the Expos back in 1979. Chris Speier got the only hit in the eighth inning.

Here's a link to the game's box score.
http://www.baseball-reference.com/boxes/LAN/LAN197905110.shtml

Ok, I'll bite. Who was the next pitcher to triple in his first at-bat? Cool Rau memory from Steelehere.

Joel Hanrahan. Coincidentally, he also came up with the Dodgers. But the triple came with the Nationals.

Yes, that is Holman Stadium at Dodgertown in Vero Beach, a totally awesome fan accessible dream of a spring training facility. I got SO MANY autographs (and HOF autographs), and broken bats (and a Mike Scoscia helmet) during my many trips there. Plus they annually played the Yankees there as well. Open air dugouts, fans got to sit on the grass outfield walls, just didn't get any better than that place....