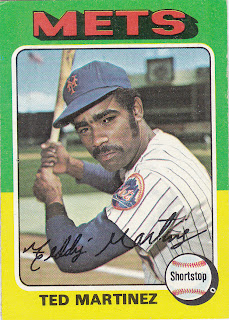 Card fact: I've lost track of the number cards in which the signature doesn't match the name listed on the bottom. But here is another example. Ted Martinez refers to himself as "Teddy."

What I thought about this card: I first saw this card in the possession of my friend Jamie, the Mets/Yankees lover.

What I think about this card now: It's a great '70s card. The pinstriped Mets uniform, the Shea Stadium scoreboard, the American flag.

Other stuff: Martinez played nine seasons in the major leagues, mostly at shortstop. But he also played a lot of second base and the outfield. He was mostly a backup, but did appear in over a 100 games in 1972, 74 and 75. He played for the Mets, Cardinals, A's and Dodgers.

Martinez played on pennant-winning teams with the Mets (1973), A's (1975) and Dodgers (1977-78). But he never played in the postseason with L.A. Interestingly, it was with the Dodgers where he revived his career (after not playing in 1976), as a utility infielder.

Martinez managed and coached in the Dodgers organization after his playing career. 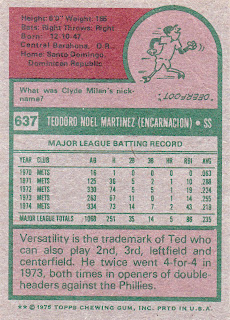 Back facts: That cartoon always freaked me out as a kid. "What happened to his legs?"

Other blog stuff: Former Tiger/Ranger/Rockie/Red Sox/Brewer/Ray Gabe Kapler was born on this date in 1975.
Posted by night owl at 12:38 AM

I was awful tempted to go back and look at every card to see which sigs didn't match up, but that cartoon and the fact that I forgot Gabe's birthday leave me with too little time.

hey! I actually own this card! I think this might be the first 1975 card that I own that you've shown on the blog.(I don't have that many though). I really like his expression and the other things you mentioned about the flag and scoreboard too. Also I never noticed until now the weird looking T in Teddy. It's a pretty dope looking card.