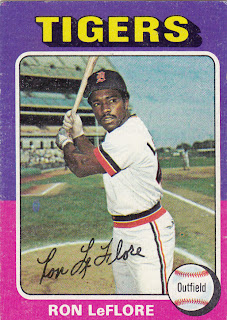 Card fact: This is one of the cards that I pulled out of those first three packs of cards I ever bought.

What I thought about this card then: It helped me become a Tigers fan at an early age, since I also pulled the Mickey Stanley and John Hiller cards out of those first packs, too.

What I think about this card now: This is such an iconic card in my collecting history that I can't appreciate it for what it is -- Ron LeFlore's rookie card.

Other stuff: LeFlore was one of the big names in baseball when I was growing up, mostly because of his criminal past as a teenager. His life on the streets and prison time was made famous by a made-for-TV movie, called "One in a Million: The Ron LeFlore Story." I remember waiting with anticipation to watch this movie on TV. But I can't recall anything about it.

LeFlore didn't play organized ball growing up. His first experience with that was in prison with inmates while he was serving time for armed robbery. Tigers manager Billy Martin was tipped off to LeFlore's ability and he went to the prison to see LeFlore play. LeFlore was eventually signed by the Tigers.

LeFlore made an immediate impact with Detroit, which was going through tough times in the mid-1970s. Together with Mark Fidrych, the Tigers became a national presence in 1976. LeFlore ranked among the league's leading base stealers and he hit for a high average.

After six years with the Tigers, he was traded to the Expos for pitcher Dan Schatzeder, a trade I couldn't figure out. LeFlore stole a National League best 97 bases in his one year for Montreal in 1980. He signed as a free agent with the White Sox after the season, and had relatively limited playing time for Chicago in 1981 and 1982. He was released by Chicago at the start of the 1983 season.

After his career, he worked outside of baseball. He later managed some in independent leagues, and encountered child support issues that led to arrests. 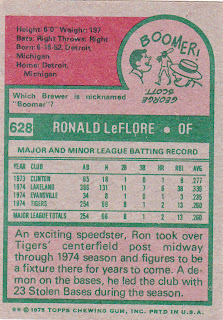 Other blog stuff: This might be the last time I get to show a card that was pulled in those first packs I bought in April of 1975. So here it is: 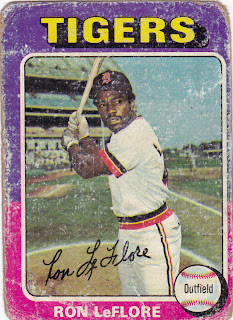 I never knew LeFlore's story. That's a different path to the Majors. Your original card is like LeFlore, a little rough around the edges and it's been through a lot of tough times.

I also remember the movie, but the only thing I remember is Lavar Burton played the part of LeFlore in the film.

I remember Ron from his days with the Expos. I didn't realize he only played one year there. I was too young to know all about his past. But CBC showed a lot of Expo games that year....

Below are links to a few clips from the Ron Leflore story.

I remember the movie had Mickey Stanley training Ron how to time his catches in the outfield so his momentum was going toward the infield when he got leather on the ball. Great story....and I know that his time in Chicago included some hijinks, based on chats I've had with one of his teammates at that time.