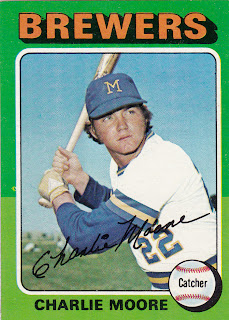 Card fact: This is Charlie Moore's first solo card. He appeared on a four-player rookie card in the 1974 Topps set.

What I think about this card now: Moore is one of those guys that uses circles instead of dots for his "I"s. In fact, it's a rather stylish signature all around.

Other stuff: Moore played all but one of his 15 major league seasons for the Brewers. His last year was with the Blue Jays.

Moore split time behind the plate until the late '70s when he became the Brewers' principle catcher. But then in 1982, Moore was shifted to right field, and he played more during that period than he ever had. Moore had quite a bit of speed for a catcher, making him versatile enough to play other positions. From '82-84, his primary position was outfield. Then in 1985, he returned to catcher.

Moore hit .462 against the Angels in the 1982 ALCS, and he continued his hot hitting in the World Series that year, batting .346 against the Cardinals.

After his career, Moore returned to his native Alabama and worked in sales. 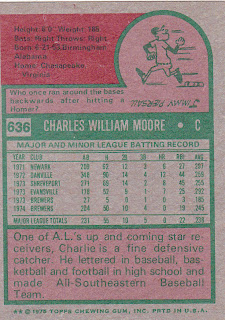 Back facts: Topps slathered it on a little thick with the "one of the A.L.'s up and coming star receivers" line. Good player, sure, but he was no Fisk/Munson/Bench/Simmons.

Other blog stuff: On this date in 1979, the first hurricane I ever heard of -- Hurricane David -- hit the Caribbean and the eastern U.S. By the time it was gone, more than a thousand people had died. Can you imagine what the Weather Channel would have done with that hurricane?
Posted by night owl at 1:42 AM

Ah, another catcher card. I think they should photograph ALL catchers in gear and in the position. Hey, this guy also got a mention over on your main blog tonight. Man, I'm so obervant.

What's up with Jimmy Persall running the bases backwards? Did he get beaned the next time up?

The cartoon has a funny story behind it. Piersall did it after hitting his 100th career homer. There's something to the story about Duke Snider close to hitting his 300th or 400th or some milestone, and Piersall did the backward run to show up Snider.