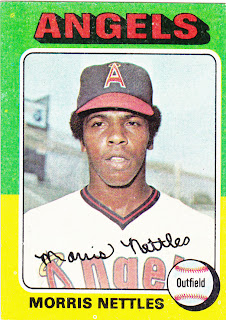 What I think about this card now: This is the first 1975 O-Pee-Chee card I ever obtained. When I was trying to complete the set in 2004, the dealer that I went to a lot owned rows and rows of '75s. There were some OPC's mixed in, too. Not knowing that it was an OPC card at the time, since the fronts of the '75s are the same as Topps, I bought it and didn't realize it wasn't Topps until I got home.

I went through the same process several other times in '04 and now I have about 15 OPC cards from '75.

Other stuff: Nettles came up to the Angels in 1974 and found a spot in the outfield later in the season. The following season, the Angels rewarded the speedy player with the starting center field job. But a young Mickey Rivers took over the position in no time, Nettles was moved aside, and he managed just a .231 average in 1975.

Nettles was dealt to the White Sox after the season in the Bill Melton trade. Nettles never made it to the majors again, playing the 1976 season in the Chicago and Cleveland organizations. 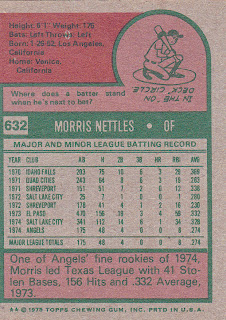 Back facts: If I'm being picky -- and I am -- the cartoon figure is not standing in the on-deck circle.

Other blog stuff: On this date in 1991, No. 1 draft pick Brien Taylor signed a record $1.55 million contract with the Yankees. All your Brien Taylor cards just laughed at you.
Posted by night owl at 12:03 AM

Nothing....to...say. Wow, that is one dull card. Still, it beats a box full of Brien Taylor cards.

IN ACTUAL FACT YOU WILL FIND FEW BATTERS EVER STAND RIGHT ON THE ON DECK CIRCLE AS OFTEN IT HAS ALL THOSE THINGS LIKE THE WEIGHT BAT, TAR RAG, DONUT AND MORE ON IT ... ADDITIONALLY, MANY PLAYERS ROAM AROUND WITH SOME EVEN GOING A FAIR DISTANCE FROM WHERE THEY ARE SUPPOSED TO STAND.


NEGLECTED TO MENTION IN PREVIOUS POST OF 11 FEBRUARY 2017 THAT MORRIS NETTLES DIED DUE TO COMPLICATIONS OF PANCREATIC CANCER ON TUESDAY 24 JANUARY 2017 AT THE AGE OF 64.