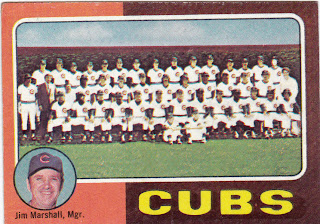 Card fact: This is the final team card in the set. I'll commemorate it by noting which color combinations were used with each team:

What I thought about this card then: Zzzzzzzzzzz. Team card.

What I think about this card now: Well, first, it's probably the most out-of-focus, far-away team photo in the whole set, which might explain why the Cubs stuck with floating head team cards for most of the '70s and early '80s.

Secondly, I still don't know why the Cubs went with the team pose and the White Sox the floating heads in '75 when it was flip-flopped all the other years.

Other stuff: The Cubs finished dead last in 1974, their first last-place finish since 1966. Jim Marshall replaced Whitey Lockman as manager in the middle of the season. Marshall would last two more sub-.500 seasons before Herman Franks took over for the 1977 season. 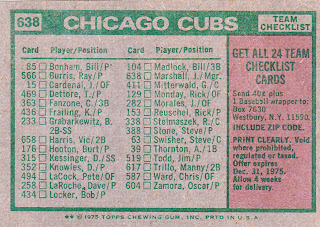 Back facts: Darold Knowles, Bob Locker and Manny Trillo are all listed on the Cubs checklist although none played for the team in '74. All are airbrushed into Cubs caps.

Other blog stuff: One last opportunity to see how well Topps represented a team from the 1974 season. Let's see how many Cubs from '74 were in the Topps set.

This is where they rank with the other teams:

That's all of them! The Twins are better represented in the set than any other team. How about that?

And my real mission was to see if anyone major was left out of the set as has been the case in some other Topps sets. I wasn't able to find anyone significant, though, in the '75 set.
Posted by night owl at 1:01 AM

This was the last card my Dad and I needed to complete our 1975 Topps set. The old pocket-sized price guide I had listed card #638 as Jim Marshall so we spent more than one baseball card show walking from dealer to dealer in search of the "1975 Topps Jim Marshall card."

It never dawned on us to look for card #638 - we just knew we needed the Jim Marshall card. Finally, after a few unsuccessful card shows, we wised up and told a dealer we needed "card #638" from the 1975 Topps set.

"Oh, you need the Cubs team card," the dealer responded. My Dad and I smiled at one another as we never once thought to look for Jim Marshall on a team card. I remember staring at the card the whole car ride home, amazed at the realization that we had just completed the 1975 Topps set.

I was just mentioning on another blog that when I was writing this, I wondered if there was a card out there of Jim Marshall the player. There was -- back in the early '60s, not like the mid-70s like you thought.

Who is the guy whose face is whited out in the upper right?

Jim Marshall was an original Met. He had some kind of obscure Mets "first". Don’t remember exactly what, but it was something like "first Met to hit a pinch hit home run". Something like that. When we were kids we joked that the Cubs used to have the floating heads team pictures because they couldn’t get all the Cubs players to pose together in the same picture. That was in the days they had a bunch of sore heads like Durocher and Pepitone and Santo and there were always stories in The Sporting News about Cubs dissension.