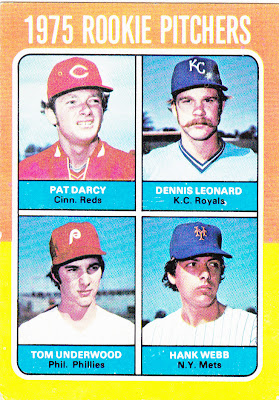 Card fact: We've got back-to-back "rookie pitchers" cards here. Unlike the previous one, I believe everyone is wearing a non-airbrushed cap.

What I think about this card now: Hank Webb looks like he's just spotted the team mascot that has always freaked him out. 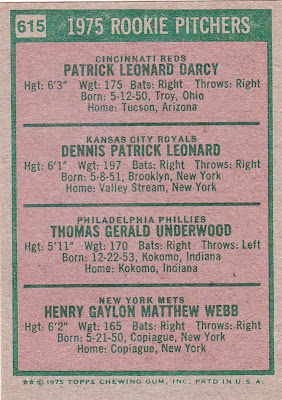 Most awesome middle name: Gaylon Matthew proves that more is better. Also, how cool is it that two players on this card have "Patrick Leonard" in their name?

Other blog stuff: On this date in 1975, the first seven Phillies who come to bat in a game against the Cubs get a hit against starter Bill Bonham to set  a major league record. Mike Schmidt hit a home run to make it 5-0 and send Bonham to the showers. The next batter, Johnny Oates, proceeds to single for the eight straight hit. Pitcher Dick Ruthven's sacrifice bunt is the first out.
Posted by night owl at 12:19 AM

1. I thought that was a diamond sparkle variation when I saw Dennis Leonard's cap.
2. At least Topps paired the two Dennis Leonard's on the same card. If they hadn't you would have questioned why.
3. It's a good start to the game when you're pitcher makes the first out.

Pat Darcy is best known for giving up the home run to Carlton Fisk in Game 6 of the 1975 World Series.