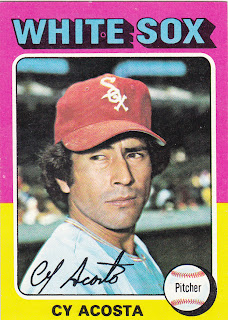 Card fact: This is the final Topps card of Cy Acosta.

What I thought about this card then: I had no idea Acosta existed.

What I think about this card now: I'm fairly certain that this photo is from the same photo shoot as Acosta's 1974 Topps card. In that photo, he is wearing the road White Sox uniform while standing near a dugout.

Other stuff: Acosta is the only player named "Cy" since the mid-20th century (his actual first name is Cecilio). As you might know, "Cy" was a pretty common name for ballplayers during the 19th and early 20th century.

Acosta came to the White Sox from the Mexican League. He was used as a reliever and enjoyed a decent season for Chicago in 1973, pitching in 48 games with a 2.23 ERA, 10 victories and 18 saves. But he didn't fair as well in '74 and was purchased by the Phillies before the 1975 season. He played in six games for Philadelphia.

After '75, Acosta returned to the Mexican League and pitched there until 1986.

Acosta is also known as the first American League pitcher to bat after the designated hitter was installed. In 1973, DH Tony Muser was used as a defensive replacement for Dick Allen in the eighth inning. Allen was not used as the DH, and Acosta struck out in his at-bat. 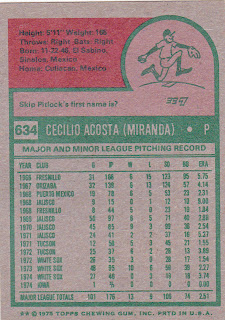 Back facts: Players with Mexican League stats fascinated me as a kid. All those strange team names.

Other blog stuff: The pink-yellow border combination moves into the overall lead with its 54th card.
Posted by night owl at 12:36 AM

Does anyone out there have any pictures of Cy in a Phillies uniform?

I'm picturing a "Card That Never Was".

Cy somehow managed two more at bats in his career and struck out both times.