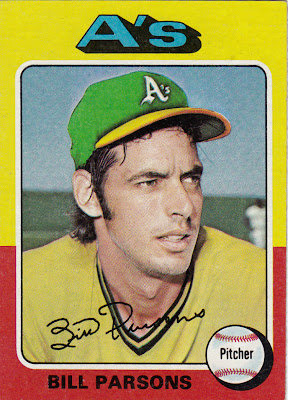 Card fact: This is the final Topps card issued during Bill Parsons' career.

What I think about this card now: Parsons is airbushed into an A's cap. He was dealt from the Brewers to the A's in June of 1974. Topps didn't do a great job on the cap, but the uniform is pretty good. The gold jersey looks realistic.

Other stuff: Parsons was a 6-foot-6 right-hander who pitched for four seasons in the major leagues. He got off to a terrific start, winning 13 games for the Brewers in 1971 and finishing second to Chris Chambliss in the A.L. Rookie of the Year voting.

Parsons won 13 games again in 1972, even though the Brewers finished in last again. The following year wasn't so great as he stumbled to a 6.69 ERA in 20 games. Milwaukee traded him to Oakland for Deron Johnson. But he pitched in just four games for the A's, and that was the end of his major league career. In late '74, Parsons was acquired by the Cardinals, but didn't play in the majors for them. 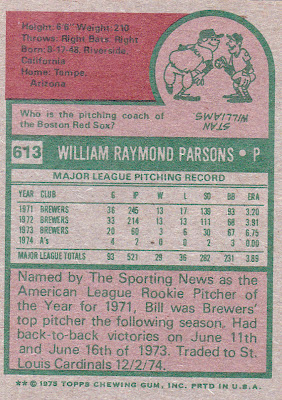 Back facts: Another frustrating card for Topps, which went through the effort of airbrushing Parsons into an A's cap only to have him dealt to the Cardinals.

Also, the cartoon is quite random. Why not do a cartoon about every pitching coach in the majors in 1975?

Other blog stuff: We are about to embark on the final subset of the 1975 set. I'm going to handle this subset a little differently than I have the rest of the cards. But I hope it's still interesting.
Posted by night owl at 2:21 AM

Is that the same Stan Williams who was the subject of that excellent night card in 1972?

The same guy. Also the dude who blew the '62 pennant for the Dodgers.

Missed my birthday by one day.

That drawing of Stan Williams is hilariously awful. I thought that was a fat belly, but that's a fat back and some weird bowlegged thing he's got going on. At least he looks happy.