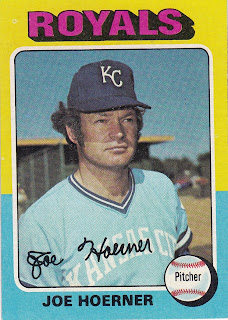 Card fact: This is Joe Hoerner's penultimate Topps card. His final card is in the 1977 set as a Ranger.

What I thought about this card then: This was a card that I obtained early in the '75 season and I traded it in that deal for some '75 minis.

What I think about this card now: That's some funky hair that Hoerner's got going there.

Other stuff: Hoerner was a full-time, sidearm relief pitcher for 14 seasons and 493 games, not a start among them. He was one of the early left-handed relief specialists, and he especially made his mark pitching for the World Series champion Cardinals in 1967. His best seasons were in the late '60s and early '70s for the Cardinals and the Phillies.

Hoerner came up with the Colt .45s in 1963. His first major league appearance came in a gimmick game for Houston as the team fielded an all-rookie starting lineup against the Mets.

He was traded from the Cardinals to the Phillies in the famed Curt Flood deal. After his time with the Phillies, his performance fell off as he pitched for the Braves, Royals, Rangers and Reds. His final big league pitch, in 1977, hit the Pirates' Frank Taveras, who charged the mound. Hoerner punched Taveras, and after the brawl, was tossed from the game.

After his career, Hoerner did some promotional work with the Cardinals and was involved in charitable causes. He died in a farming accident at age 59 in 1996, reportedly getting pinned between a tractor fender and a tree trunk. 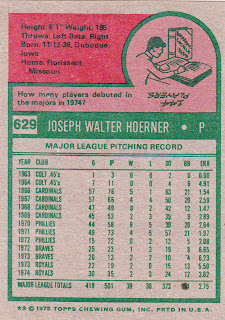 Back facts: I have no idea what the average number is for players making their major league debut in a season. Obviously, the number is much higher now than it was in 1974. But I don't know if 144 was a lot more than in 1973 or 1975, for example.

Other stuff: On this date in 1980, Charlie O. Finley got out of the baseball business, selling his Oakland A's team to the Haas family for $12.7 million.
Posted by night owl at 12:25 AM

I wonder if he's the only guy to ever be thrown out of a game and never play in another one. I've been sorting my Topps cards and I don't think I have that '77 one.