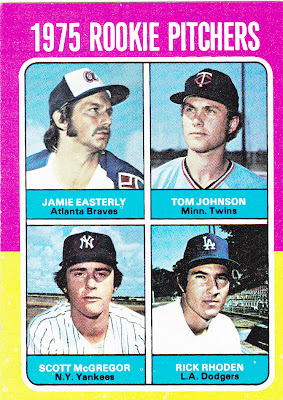 Card fact: Scott McGregor is featured as a Yankee on this card, but he never pitched in the majors for the Yankees. He was dealt to Baltimore before his big-league playing career began.

What I thought about this card then: No knowledge of it. It took me a long time to figure out that there were Dodgers on these 4-player rookie cards.

What I think about this card now: I think it'd be both cool and creepy if Topps arranged it so the players on these cards were staring directly at each other. You see that Easterly is attempting to do so, but Johnson will have none of it.

Also, both Easterly and Johnson were on future cards in which my brothers and I looked at the backs and said promptly, "holy crap, look at that ERA! He's not good!" Easterly, though pitched for 13 seasons.

Most successful player: A slight edge to Rhoden over McGregor as Rhoden has a slim advantage in most career stats and pitched a few more years. Throw in Rhoden's golfing career, and his success skyrockets. 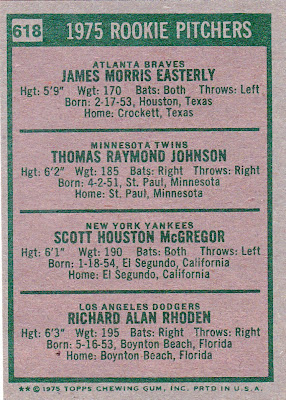 Most awesome middle name: McGregor should have insisted on at least ending his career with the Astros.

Other blog stuff: I apologize for skipping out on you the last few days. Usually I try to give some warning, but vacation departure came a lot quicker than originally planned. I should be back for awhile now.
Posted by night owl at 12:52 AM

the players looking at each other is very Brady Bunch-esque

Welcome back. I was afraid you were in a car crash or something equally dreadful.

I had the Brady Bunch thought. Yes it would be cool and creepy at the same time. Kind of like Dr. Who.

You did give us a hint when you said you'd be back with a contest on Thursday. Of course that was on the OTHER blog. I think Johnson made a crack about Easterly's mullet and it didn't make Easterly happy.