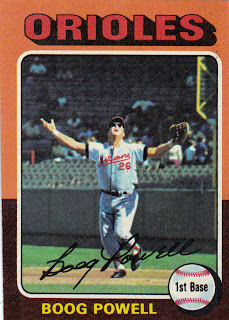 Card fact: This card really marks the homestretch for this set. With the exception of two cards, it is all players from here on out.

What I thought about this card then: Oh, my goodness, it was a laugh riot. It was the funniest card we ever saw at that young age.

What I think about this card now: The card was the very first Cardboard Appreciation subject on my other blog. It was the first one for all the reasons you can think of -- and for a few more that you can't think of because you're not 9 anymore.

Other stuff: Boog Powell made up the meat of the order for the Orioles' lineups through the 1960s and into the 1970s. He was at the tail end of his Orioles career at this point, as this is his final Topps card as an Oriole.

Powell won AL MVP honors in 1970 and finished second behind Harmon Killebrew in 1969. He hit six home runs in the postseason. He absolutely wore out the Twins in back-to-back ALCS.

Powell was traded to the Indians in February of 1975, so he was already with another team by the time this card came out. He finished his major league career in 1977 with the Dodgers. Powell is now known just as much for his barbecue as his playing career.

And just one more thing: 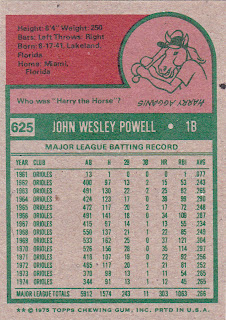 Back facts: I missed posting on Powell's 70th birthday by two days.

Other blog stuff: The orange-brown border combination bounces back to join the pink-yellow combo at the top with its 53rd card.
Posted by night owl at 2:20 AM

That's a great card in a set filled with so many posed shots. I like the cartoon too. It makes me think of the Godfather. I didn't know Boog and I almost shared a birthday!

this is one of my all-time favorite baseball cards. In a rare moment for '75, the card colors match the team colors. And the picture of Boog is a great picture. I wish I had an autographed 8x10 of it for my wall. that's how cool it is to me.

Yeah, one of my favorite cards of the 75 set. I could never seem to get hold of it when I was originally collecting this set as a kid. But it was one of the common ones to appear in ads for the 75 set I would see in the back of Baseball Digest and similar pubs, so that always made it one of my "most wanted" back in the day.

It always looked like Boog was pleading to the gods for mercy on this card.