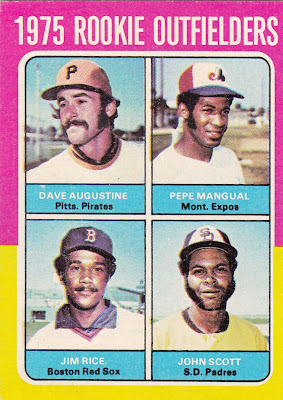 Card fact: The first pink-yellow rookie card also is one of the more coveted rookie cards in the entire 1975 set, as it's Jim Rice's rookie card.

What I thought about this card then: I vaguely recall seeing it. But not because of Jim Rice. I only recall the two guys on the top, Dave Augustine and Pepe Mangual.

What I think about this card now: This card wasn't terribly difficult to obtain. There is another rookie card coming up that was more of a chore finding.

Most successful player: Rice is in the Hall of Fame. 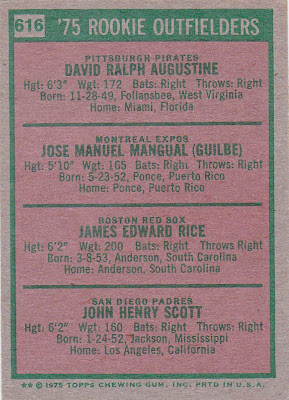 Most awesome middle name: Jose "Pepe" Manuel Mangual seems like a mouthful. I'll go with that one.

Other blog stuff: Former Mets pitcher Victor Zambrano was born on this date in 1975. Remember him?
Posted by night owl at 12:36 AM

It looks like a battle of the sideburns and John Scott wins!

He's no Dick Pole or Pete LaCock, but we did have some fun with Pepe ("Mangled PeePee") Mangual's name back in the day.