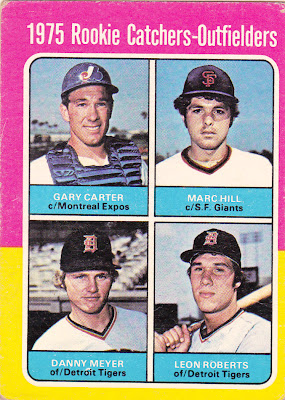 Card fact: This is the first rookie card -- as rookie cards were known back in the '70s -- that I ever saw.

What I think about this card now: It's in semi-rough shape compared with most of the other cards I have from the set. I was probably trying to save cash by getting it on the cheap. 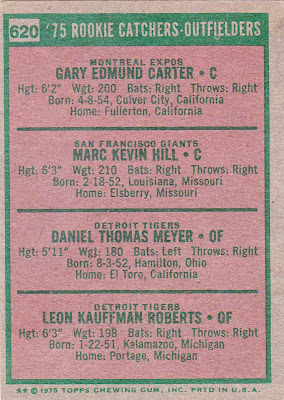 Other blog stuff: It's been quite awhile since I've featured the mini card next to the regular card. This is as fine a time as any to resume that practice: 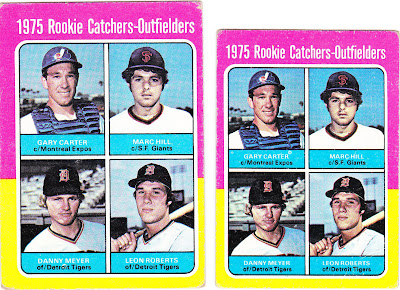 II talked to Marc Hill who lamented the fact that his rookie card cost so much. He had a good laugh about it.
Actually the three "other"guys all had solid careers.

Gary Carter must have come out of the womb smiling -- with a complete set of teeth.

Johngy, I was thinking the same thing. It must be rare that a multi-player rookie card, a 4-player card at that, ended where all guys on the card had a decent careers. Usually it's one guy you heard of and 2-3 other guys where you're like, who is that guy?

It's always great to see the mini next to the regular card. Weren't there enough rookie catchers to warrant an all-rookie catcher card?

I never really understood why these multi-player cards were so sought after as a player's rookie card. They have a tiny photo of the player, a brief blurb of biographical info, and no stats at all. They were O.K., it wasn't that I disliked them, but they didn't seem worth shelling out big bucks for. I always thought of a player's first solo card as his "true" rookie card.

Gary Carter lived a couple of blocks away from me during his tenure with the Expos.
His address was "8" McConnell Court.

I guess two rookies from the same team on the same card is a bit odd. Boy, could you imagine Topps would have put Rice and Lynn on the same card? It would be exponentially harder to find today.