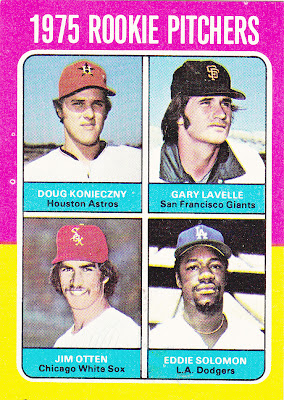 Card fact: This is the last Dodger player card I needed to complete the team set for '75 Topps. Those 4-player rookie cards always eluded me.

What I think about this card now: What a bad-ass crew, even if they weren't the most successful pitchers. I think Jim Otten is airbrushed, and I don't know why the background is blurred out.

Doug Konieczny, Astros: 1976 Topps (his only solo Topps card)
Gary Lavelle, Giants: 1976 Topps
Jim Otten, White Sox: none
Eddie Solomon, Dodgers: 1978 Topps (he was alternately known as Eddie and Buddy on his cards. He died in a car accident at age 34).

Most successful career: Lavelle was a relief workhorse and two-time All-Star for the Giants, for whom he pitched for most of his 13-year major league career. 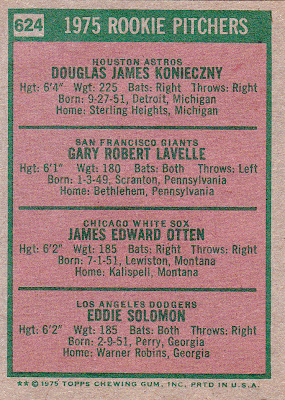 Most awesome middle name: For the second straight card, I have to go with the player without a middle name, Eddie Solomon.

Other blog stuff: The pink-yellow border combination takes the overall lead with its 53rd card. Also, this marks the end of the last subset in the '75 set. Up next, a player who just celebrated a milestone birthday.
Posted by night owl at 12:31 AM

I've looked at this card a couple of times now and I just can't think of anything to say other than Otten looks way too happy. Maybe it's the blurred background.