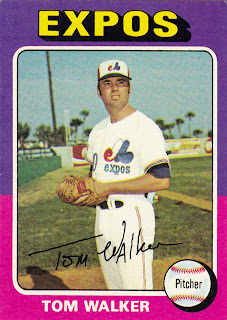 Card fact: Tom Walker is the father of current Pirates second baseman Neil Walker. That makes this the second straight card that featured a player whose son played in the majors also.

What I think about this card now: Walker seems to be strategically placed in front of the Coca-Cola sign that graces so many of the Expos' cards.

Other stuff: Walker pitched between 1972-77, mostly with Montreal. He was a reliever most of the time and was dealt to Detroit for Woodie Fryman after the 1974 season (Topps could only manage a blurb about the trade on the back of Walker's card).

Walker ended his career with stints with St. Louis, the Expos again, and the Angels. 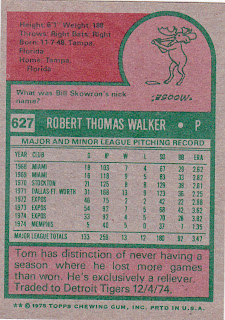 Back facts: OK, the cartoonist clearly is doing a lot more work than the biographer on this card.

The cartoonist draws a moose at the plate, which can't be easy to do.

The biographer? Well, it's obvious he had nothing to write about, so he stared at the stats for awhile and realized Walker never had a losing record and, viola, a write-up was born. Also, Walker was not exclusively a reliever. In fact, in 1974, he started eight games.

It seems like the photographer had a bunch of Expos lined up off to the side and had them come one at a time to be photographed.

Good thing they included minor league stats on the card, else the biographer would have looked pretty stupid.

And he played on the last year for the DFW Spurs, who were booted from Dallas when the Rangers showed up in '72. The Spurs were an Orioles affiliate and managed by Cal Ripken Sr. I have a nice picture book of history of baseball in Texas, and it mentions that Cal Jr. worked as a bat boy at that time, unfortunately no pictures of it.

Interesting signature, a mixture of printing and cursive. Something for everyone.

That biographer has a history of writing sentences that are constructed in the poorest of ways. No, I'm not him, why do you ask?