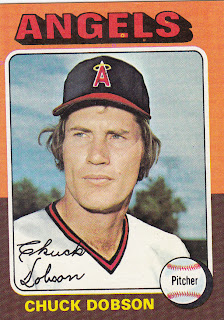 Card fact: Chuck Dobson is wearing an airbrushed Angels cap and uniform. Dobson was acquired by the Angels in June of 1974. This is also Dobson's first Topps card since the 1972 set and the final Topps card issued during his career.

What I think about this card now: I like the stacked signature in the corner. It's a bit unusual.

Other stuff: Dobson pitched fairly successfully for the Kansas City and Oakland A's from 1966-71. Known as a strikeout pitcher, he won in double figures from 1967-71 and led the American League in starts with 40 and shutouts with five in 1971.

Arm and shoulder problems plagued him and eventually cost him the 1972 season and most of the 1973 season. He was property of the Mexican League Mexico City Tigers when purchased by the Angels. He pitched for the Angels in '74 and '75 and in the minors in 1976.

Dobson is known for two other things. One is being Reggie Jackson's roommate as the two were the first regular interracial roommates in baseball history. Also, Dobson appears in dramatic fashion on one of the best-known baseball cards, but it's not his card. 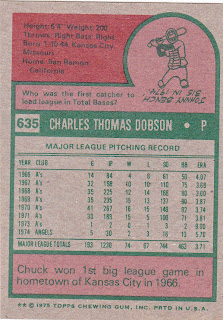 Back facts: Dobson gets a card number ending in "5" strictly based on his performance of at least three years prior to this card.

Other blog stuff: Since I made a statement that this card was the only one I had in regular, mini and OPC form, I have since acquired the Dobson card in all three forms. Why Chuck Dobson? Hey, you take what you can get with the '75 set.

Sweet cartoon. Is that the pre-cursor to the Bonds-like armor you see players use now? That may be my favorite cartoon of the bunch.

Another spring picture taken in the desert. I will find myself one someday. Where have all the good cards gone? So cold and lifeless nowadays...