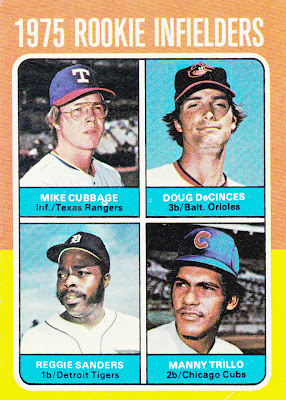 What I think about this card now: Manny Trillo is not wearing a live Cubs hat. It is most likely an airbrushed A's cap.

Most successful player: Toss-up between Doug DeCinces and Manny Trillo. DeCinces played 19 seasons in the majors and hit 237 home runs. Trillo played 17 seasons, was an All-Star for the Cubs and Phillies and had a great 1980 NLCS.

DeCinces was just in the news last week for a bit of ugliness. 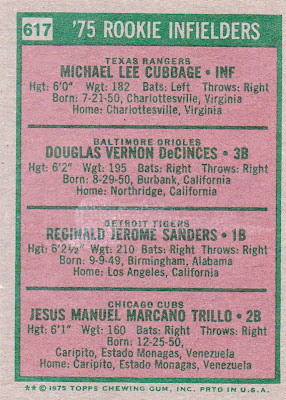 Most awesome middle name: U.S.-born players are so boring. Have to go with Manuel Marcano.

Other blog stuff: On this date in 1975, actress Charlize Theron was born. The world would never be the same.
Posted by night owl at 1:07 AM

Were you aware that Sanders is one of those rare guys to homer in his ML atbat?

Another Ranger card I need to acquire. More importantly, a very happy belated happy birthday to Charlize. Yea, we're so close I just use her first name.