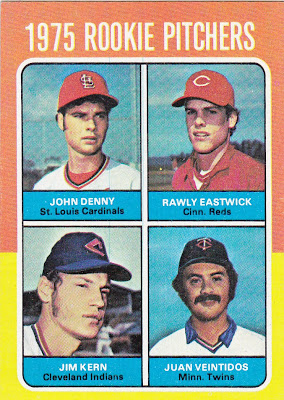 Card fact: This is the first of the rookie cards to feature a player who never made the majors. Juan Veintidos was featured here on the strength of his 14-5 record in the minors in 1974, but he never got the call in 10 minor league seasons.

What I thought about this card then: If it's an orange-yellow bordered rookie card then I never saw it.

What I think about this card now: Veintidos appears to be the happiest of the four, yet he didn't enjoy the success of the others. I guess you had to be cold and ruthless to succeed as a major league pitcher in 1975.

Most successful career: Both Eastwick and Kern got off to quick success as relief pitchers, Eastwick becoming a force for the Big Red Machine in the '75 World Series, and Kern wowing Cleveland fans with his arm and quirky behavior. But each faded almost as quickly. I'm going with starter John Denny, who pitched 13 fairly consistent seasons and won the Cy Young for the National League champion Phillies in 1983. 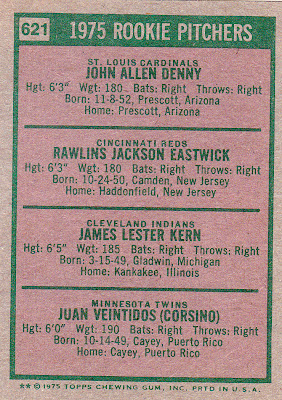 Most awesome middle name: Jackson is not as awesome as Rawlins, but there's not much to go on here.

Other blog stuff: For those of you who spend all of your time in vintage cards and vintage only, I would be remiss if I didn't mention that there is a new set out this month that pays tribute to the 1975 Topps minis. Current and past players are featured on mini cards that are similar in size and look to the '75 minis. They are inserted randomly into packs of 2011 Topps Lineage.

Unfortunately, the backs do not feature the '75 backs we all know and love. And the cards are made from that same slick crap that has plagued the Topps base set for the last decade. But I appreciate the thought by Topps and am trying to collect as many as I can. I owe it to my 9-year-old self.
Posted by night owl at 1:16 AM

I recently heard the EMU, Jim Kern on a local sports radio station and he has a guide service for hunters, but apparently he does most of his shooting with a camera. He has a website: