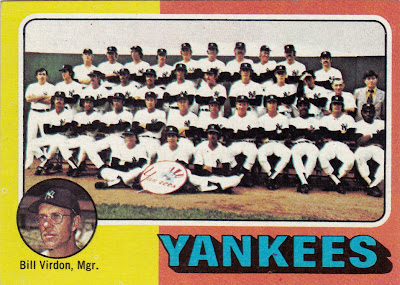 What I thought about this card then: It's a team card. I had no thoughts.

What I think about this card now: This has to be the most disorganized team photo in the entire set. Look, I've circled the examples for you: 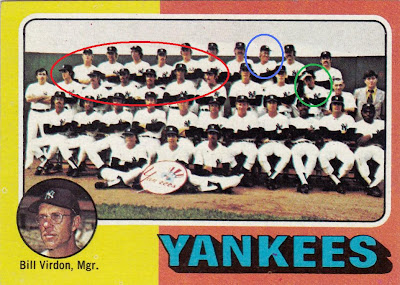 Most of the guys circled in red are not looking at the camera at all. They're all looking off to their right. Meanwhile, the guy circled in blue is in full guffaw after being told something funny by either Dick Tidrow or, um, some other guy in a mustache. And the guy circled in green -- who may or may not be Bobby Murcer -- has his head down and his hand on his cap like he doesn't want his photo taken.

Was the photographer that lousy or did he have a difficult time controlling the team and just said, "to hell with it."?

Other stuff: The Yankees finished in second place in 1974, which was their best finish in 10 years. But New York was barely above .500 two-thirds of the way through 1975 and that wasn't good enough for the new boss, George Steinbrenner. Virdon was dismissed and replaced by Billy Martin, and you know what happened after that. 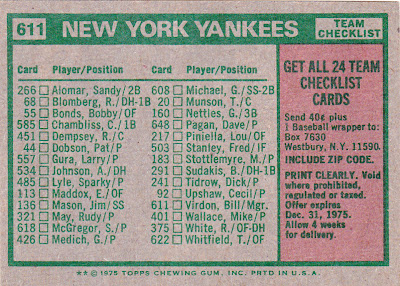 Back facts: Scott McGregor is listed on the Yankees checklist and is featured on one of the upcoming 4-player rookie cards, but he never pitched a major league game for the Yankees. He was part of that huge trade with the Orioles in 1976.

Other blog stuff: Let's see how well Topps represented the 1974 Yankees in the set. New York sure made it difficult with a bunch of transactions.

The Yankees used 44 players in 1974, which is just one player short of the top number used by the Angels and Indians that season. Topps featured 31 of those N.Y. players in the '75 set, including several pictured with other teams -- Mike Hegan with the Brewers, Bobby Murcer with the Giants, and Steve Kline, Fred Beene, Fritz Peterson and Tom Buskey with the Indians. Topps also threw in McGregor and airbrushed Bobby Bonds into a Yankee cap.

The player with the most at-bats for the Yankees who wasn't featured on a card was infielder Fernando Gonzalez. He hit .215 in 121 at-bats in 1974, had a card in the '74 set and would play in the majors through 1979. But after '74, Gonzalez headed to the Mexican League and didn't return to the majors until 1978.

So, Topps featured just over 70 percent of the players who competed for the Yankees in '74, which puts New York in the middle of the pack:

What's worse than a Yankee card? How about one with ALL of them on it. Seriously though, if that was the best of the photos he took, I'd like to see the worst.