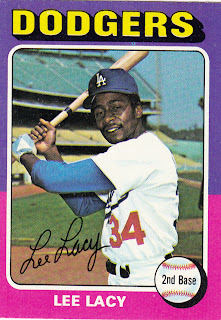 Card fact: This is the final Dodger card in the 1975 Topps set.

What I thought about this card then: I didn't see it. It was one of the last Dodger cards I needed to finish the team set.

What I think about this card now: It's a happy card as Lee Lacy poses there in Dodger Stadium.

Other stuff: Lacy was a backup infielder for the Dodgers throughout the 1970s before becoming a role player with the Pirates in the '80s and then a starter later in his career with Pittsburgh and Baltimore.

Lacy had trouble breaking through the Dodgers' vaunted infield in the '70s. He was one of those players that I wished would get a chance to be a starter -- preferably pushing Bill Russell out of the starting shortstop role. I was disappointed that Lacy was traded to the Braves in the Dusty Baker deal, figuring that would be Lacy's big break.

But it wasn't. Lacy returned to the Dodgers a year later as L.A. sent pitcher Mike Marshall to Atlanta. He enjoyed a pretty good World Series against the Yankees in 1977, going 3-for-7 with two RBIs in four games. But after 1978, he signed as a free agent with the Pirates.

Lacy moved to the outfield with the Pirates and was on the 1979 World Series-winning team. He hit above .300 four of the five years he was with Pittsburgh. He appeared in his most games between 1984-86 when he was in his late 30s. 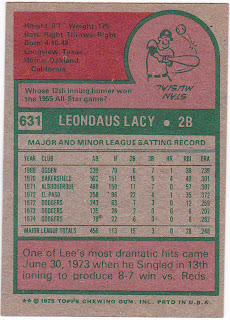 Back facts: "Singled" is not capitalized. Just want to make that clear one more time for all the grade school kids out there.

Other blog stuff: 1970s pop icons Gene Simmons and Rollie Fingers were each born on this date.
Posted by night owl at 12:44 AM

Yea, but what if he really, Really Singled? I mean he just really SINGLED good? Then it would be capitalized, right?

I didn't think so.

No comment on his lack of a middle name or more importantly, the awesome first name of Leondaus? That's a good old-fashinoned baseball cartoon. No horse heads or anything.