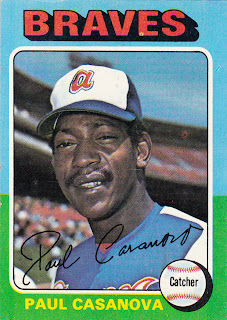 Card fact: This is the final Topps card issued of Paul Casanova during his playing career.

What I thought about this card then: I had the mini card. I didn't have any thoughts except I would always confuse him with long-ago Cubs all-star Phil Cavarretta. This can be attributed solely to the fact that both of them have the initials of P.C., because they are not alike in any way.

What I think about this card now: Casanova looks pretty happy in most of his cards. But in this one he seems like he has an idea that he's at the end of his career.

Other stuff: Casanova was a strong defensive catcher who spent most of his career with the Washington Senators. He played for them for seven seasons from 1965-71, winning an All-Star selection in 1967, his best season.

Casanova actually was signed by two other major league teams before the Senators -- the Indians twice, and the Cubs, but he didn't stick until playing for Washington. His hitting declined in the '70s and he was dealt to Atlanta, where he worked as a backup catcher through 1974.

Casanova's son, Raul, was a major league catcher from 1996-2008, most recently with the Mets (the transactions file on Raul Casanova is amazingly long). 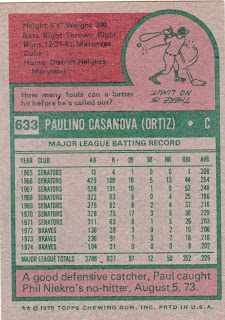 Back facts: Niekro's no-hitter came against the Padres before a whopping 8,000 fans in Atlanta.

Other blog stuff: I'll show the mini next to the regular sized card: 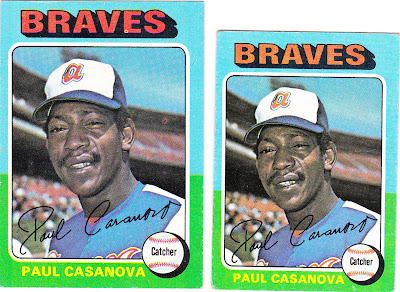 Dueling Casanovas!
Posted by night owl at 1:01 AM

What's with that cartoon? Three fouls is an out? What is this, beer league softball?

I think I have 3 or 4 of his Senators cards. I'll figure it out soon enough. The Senators wantlist is on the horizon.